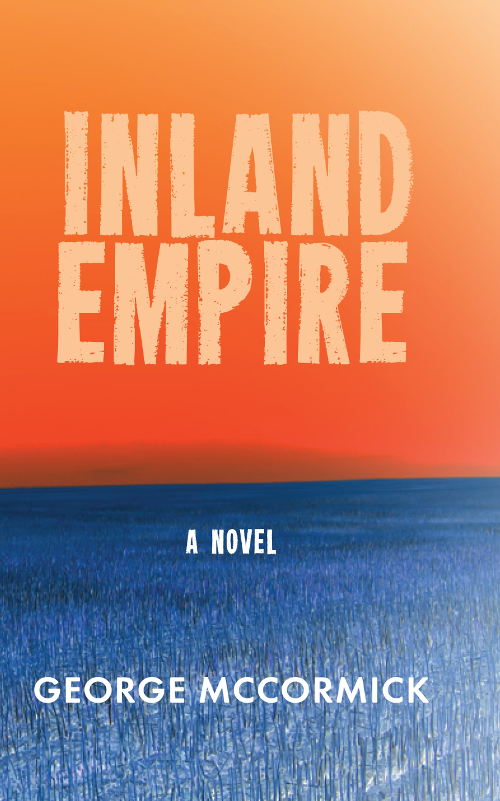 George McCormick is the author of two books of fiction. Both are marked by a strong sense of place, the American West specifically, and a poet’s ear for language. The opening story in his short story collection Salton Sea (Noemi Press, 2012), “The Mexican,” earned him a PEN/O. Henry prize in 2012. Inland Empire (Queen’s Ferry Press, 2015), which was just released, is his first novel and follows a young photographer from California to southwest Oklahoma, where he has just taken a job teaching at a technical college. Divided into four formally distinctive, and often inventive, sections, Inland Empire at times reads as much like a lyrical essay as it does a novel, and for this reason has been compared more than once to the essayistic novels of the late W.G. Sebald. It is a meditation on ruin, beauty, and aesthetics, among other things, and there is an energy to the prose that makes such meditations seem absolutely vital. George and I began working at the same university (Cameron University in Lawton, Oklahoma) in the fall of 2009. I was fortunate enough to read sections from Inland Empire while it was being drafted, and my immediate response to each new batch of pages was always: Goddamn I wish I was writing this book. This interview was conducted over email in a couple offices fifty feet apart and during what time we could carve out between the endless and obligatory week-before-classes-start meetings during the first week of August.

George McCormick: One of the things I like about living in Oklahoma, and in Lawton specifically, is that it is almost impossible to delude yourself about the state of the contemporary American West. Whether we’re talking about agribusiness, the military industrial complex, income inequality, drought, etc., its problems are right there in front of you. There are other parts of the country where I’ve lived that are good at hiding certain things—in fact a lot of times we pay good money for these kinds of things to be hidden from us—but here in Oklahoma, so much of what ails America is just naked and in plain view. It’s raw and funky. Which is great if you want to write about the West, but not great if you’re trying to raise a kid. In terms of geography, I envision Oklahoma as existing in an interior American West—Kansas, Nebraska, Wyoming, eastern Montana—that is dominated by similar landscapes and industries.

At one point the narrator in Inland Empire says that he is a religious person who doesn’t believe in God. It struck me as I read the book this time that Lawton could be described in precisely opposite terms. There’s plenty of God, but very little in the way of the religious, if to be religious is, as the narrator defines it, “to believe deeply in things like ecstasy and metamorphosis and epiphany.”

I wanted the photographer narrator to believe, absolutely, in the power of the art he was making. So powerful that it could be a bridge to some higher power. If this makes him slightly naïve, so be it. I’ve always been drawn to artists who seek to make or discover this bridge, and here I’m thinking of writers like Denis Johnson and Flannery O’Connor, musicians like John Coltrane. And I would agree that what passes for theology in a place like Lawton often seems small for what, by definition, is supposed to big-picture.

Ben Lerner says someplace something to the effect that the novel as a form is about how we experience time. (I remember you saying once that the novel is about the art of digression, and I wonder if those two ideas aren’t similar.) It seems that the different formal approaches in the novel’s four sections are playing with different ways that readers experience the narrative temporally, and even spatially. I’m thinking in particular of “The Mini-Malls of Emporia, Kansas.”

I think I moved away from writing short stories for precisely this reason: I wanted to narrate events that took place across space and across time. Short stories don’t seem to have any room for boredom, or digressions; it’s almost impossible for a character to get lost in a short story. Or at least make it believable. Formally, I wanted each section to feel different. I knew that the narrator’s voice was strong enough to keep everything, ultimately, hanging together, but since I wasn’t using paragraph breaks, and I had these long blocks of text, I needed to find a way to break them up. I’m also drawn to novels that seem to end and start again, regenerate, as they go. Having each section be formally different was a way to keep jump-starting the book.

At one point, the narrator has a realization that the grain elevators he’s been photographing, and that he sees as emblematic of “the plains,” are probably all filled with corn and sorghum that is in all likelihood going to be turned into processed and packaged foods—“Dr. Thirst, Real Kola, Quist, Mountain Breeze.” The thought is depressing as hell, but at that moment he’s seeing those grain elevators as they are for the first time. He’s no longer sentimentalizing them. The book as a whole seems to get a lot of its energy from these moments of simultaneous repulsion and attraction. I’m thinking of the narrator looking at his student’s pictures from Iraq, or Pettibone looking at a picture while telling the narrator, “That’s what it looks like when you look away.”

Repulsion and attraction, I think that’s right. A deep ambivalence. I think what Pettibone brings up that is important is this—when you look away, what do you choose to see? When you refuse one thing, what then do you accept? I think this is why I included those Forché lines in the epigraph: “To what and to whom does one say yes? / If God were the uncertain, would you cling to him?”

In your “Research Notes” essay for Necessary Fiction, you talked about leaving room for improvisation when you were writing this. I’m wondering if you could talk a little about what that looks like, what it feels like. It seems to run so counter to what we’re often saying when we’re teaching writing, which is often so much about constructedness, the pieces going together, the work following a plan.

I’m probably like most writers in that I make a ton of outlines before I even really start writing. Those are useful, but it’s always a good thing to see them in the garbage can. It’s the outlines and plans that you develop in the midst of the book—the ones that emerge—that are most valuable. When I was writing Inland Empire, I was reading a lot of nonfiction about photography and about landscape. And so often the ideas I encountered in my morning reading would make it into my afternoon writing. There’s something invigorating in working that way, that swiftly. Probably because it is the exact opposite, in terms of methodology, of what I learned in graduate school. But one of the objectives of the book, frankly, was to break as many creative writing class rules I could. For instance, I tried to tell more than show. And I wasn’t really interested in establishing tension. But by making these choices, something happened: a voice, a passive voice, emerged. And since I like how this voice talked, he got to narrate the novel.

Inland Empire is an antiwar book. I’ve heard you say that before, and reading it it’s pretty clear that that is what it is—even if it is also a meditation on aesthetics, space, light, and so much else. Reading those early pages, though, when you were first drafting the book, I wouldn’t have thought that it was, and I don’t think you thought that then either. How do you think that came about?

You’re right, when I began the book, it wasn’t about war at all. But I think this might tie into my choice to allow for a certain amount of improvisation to exist in the writing process. Allowing time and space for new ideas everyday also allowed for exploration, and the more I explored what it meant to live in a town like Lawton/Fort Sill, the more I saw how this place was connected, via the military, to all of these other places in the world. Also, it’s impossible to live in a military town and not know that this country is in a perpetual state of war. It connects you to past events in a way that is haunting. Lawton is a violent town, and I’d be naïve to suggest that this violence isn’t anything but a manifestation of certain socioeconomic realities; but I believe, too, that a history of violence exists here and can’t be ignored. It’s who we are.

One of the things that strikes me is the descriptions throughout the book of southwest Oklahoma’s particular kind of ruin. Like this one:

A mile later I passed a Subway, then a Sonic Burger, then several strings of abandoned retail spaces tucked behind long, broad, empty parking lots. Occasionally a stretch of sidewalk would appear, and I would ride on it, and each time it would either dissolve into an open lot, or end abruptly, the concrete panels suddenly disappearing as if this was where the fiscal year’s money had run out, or been lost, or stolen, or cancelled. I passed an abandoned grocery store, an empty bank, and a store selling prosthetics that looked open (limbs against a glass façade) but wasn’t, before coming to an enormous Baptist church that took up an entire city block.

More than anything, this is me finally finding the language to describe the landscape of my childhood [in Ontario, California], a large part of which was spent on top of a skateboard in places—behind mini-malls, car washes, fast-food chains—that are not meant to be seen or experienced. After I stopped skating and moved away from southern California, I became a big walker. I walked everywhere. For almost two decades I lived without a car, and I think this has had a big impact on me and how I see urban and suburban spaces. A lot of this stuff was locked up inside of me until I experienced Robert Adams’ book California. In it are these beautiful black-and-white pictures of southern California in the seventies, smoggy as hell, everything flat and in decay. This book was a revelation to me because I’d never seen anybody make a piece of art that had to do with where I was from. You can do that? It was the first time I saw it as being beautiful, too. It’s hard to describe, but it was as if Adams had photographed my memories, it was that profound. Then when I moved to Oklahoma, and was around this kind of franchised landscape full of sprawl and decay, it reminded me a lot of home. I’d been away from that for a long time. It’s weird saying that moving to Oklahoma was like moving back to California, but as my friend Rob Roensch says, “If you’ve been in the KFC in Worcester, Massachusetts, you’ve been in the KFC in Edmond, Oklahoma.”