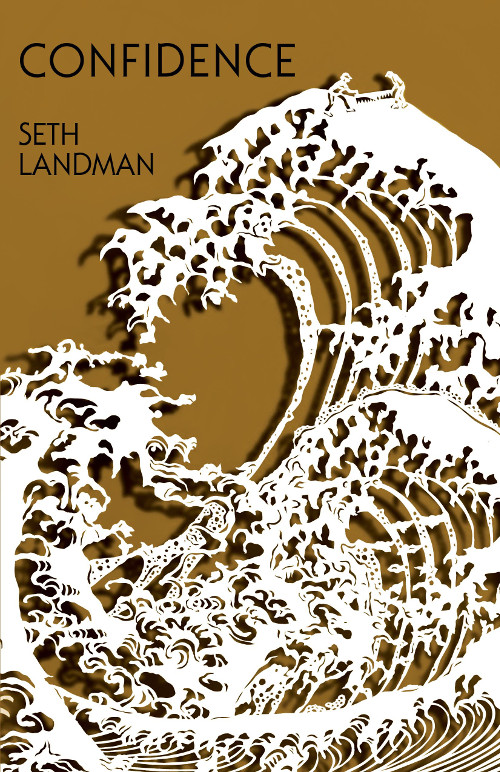 Confidence is divided into three roughly equal sections, each of which comprises a single long poem, each long poem comprising a few dozen long stanzas comprised of short lines, no more than a beat or two and without punctuation. The book’s lyric moves, therefore, at the pace of the speaker’s one-to-two-beat flitting thoughts, formally reflecting the speed of a mind unencumbered by the need to articulate itself with grammatical or syntactical coherence. Confidence, is, essentially, a transcript of unfiltered and organized thoughts. Moreover, the thoughts are those of a speaker given to emotional caprice and only occasional reflection, a speaker who is restless, impatient, or unwilling to pursue or diagnose the symptoms of any one emotion, moment, or image enough to articulate its origin or its terminus. Like the wave on the book’s cover that breaks toward an unseen shore, these poems break toward an emotional center that we never see, indiscriminately collecting flotsam and jetsam, jettisoning future lagan and derelict.

In the first section of Confidence, “Telling You I Love You,” each stanza begins with the phrase “I love,” and the anaphora of “I love,” because it is roundly applied to everything that we read in the section, both deadens the meaning of the phrase at the same time that it draws attention to that deadening through its relentless repetition. A reader’s feelings about the importance of this paradigm of thought regarding the relationship between language and the world will dictate how the reader responds to Confidence as a whole, because Landman emphasizes the speaker’s confrontation with this paradigm early and often: “I love saying love / not even meaning it / but yes meaning it also / just saying the next thing.” Indeed, it is often the “next thing” that interrupts the previous thing, the speaker interrupting himself and undermining himself, that moves the poems forward. In fact, the speaker often presents something, it seems, only to undermine it (“I love Mount Everest / I’ve never been there”; “I love history / it’s hard to say why”), and so this combination of love and ambivalence, or, at best, love and unexplored epiphany, creates a reified tableau of surface-level observation. Does the speaker love history, or does he love the concept? Does he truly love it, or does he not love it all? Most importatntly, does Landman hope that the way in which his speaker loves history (or does not) says something substantive about the relationship between history and the subject, the way that history bears on the individual, or does he rather hope to show his speaker’s general disengagement with historical process?

The book does not aim to answer these questions. Rather, it carries on in its own rhythm, always moving on to the next thing, refusing to dwell in or pursue any one line of inquiry. Unless, that is, the line can be pursued in a comic way, such as likening the universe to sizes of popcorn: “sometimes you think / of the universe / like sizes / of popcorn / fries or soda / the universe small / medium large /  extra large / extra extra large / extra extra extra large.” The book’s second section, “Confidence,” occasionally dips into heavier themes (“someone is dying / and when someone is dying / you understand / everyone dies”), but even in those cases ends up settling with flip and dismissive statements that preclude any real sense of depth (“most of the day is stupid”). The undertow of the book’s irreverence and sarcasm is strong.

No doubt the juxtaposition of weighty themes with pithy remarks is one of the book’s aims, and a self-awareness about the book’s construction adds a dimension to this juxtaposition: “The other day / I woke up and knew / my career was over / I think / you can say a lot / in a little space … I wrote these little things.” The speaker is both aware of his trivializing and also aware, to some extent, of how he is processing that trivializing: “Listen / this is a feeling / this is a feeling / and I have been / listening to it.” But that self-consciousness about the work itself (“and life is stupid / but it can be / stupider I can / in my great work / travel the country mile from”) only reduplicates the very same problem at the center of the speaker’s predicament in Confidence: As a reader of this book, how can I care to read more into these themes than the speaker is willing to say or the author is willing to write about them? Or, how can I do more with the writing in Confidence than the speaker suggests he does with, for instance, religion (“believe it haphazardly / paying attention / almost not at all”)?

In the book’s final section, “Breakwater,” the speaker begins, fittingly, asking “And then so what,” and we are again confronted by the kind of vagaries that have dominated the book’s frustrated attempts to explain what, if anything, matters to the speaker beyond his own train of thought: “The past collapses / you are waiting for something” [emphasis mine]; “And in the background / the city went suffering / you could be patron saint of artless sincerity / political / and nobody feels anything” [emphasis mine]. In the end, the speaker’s ultimate awareness of his own shortcomings (“I know / I’m here trying / to make this / exclamation point / a little quieter / trying and failing”) surfaces as a final, self-conscious statement, and so perhaps we can say that Landman’s book is an illustration of a certain predicament that, regardless of how elaborated, always ends with an expression of futility. Perhaps what Landman is seeking to do is express a speaker’s inability to make love, history, or politics matter in his own life in a meaningful way, a way that is not, ultimately, stupid or even stupider than stupid, as he suggests. And so if a poetry that takes this predicament or condition as its primary expression interests you, Landman’s book is an extended meditation on the subject. Confidence is, as its controlling metaphor suggests, a breakwater, a breakwater for ennui and melancholy regarding not only the world in which the speaker lives but writing that enervates it.