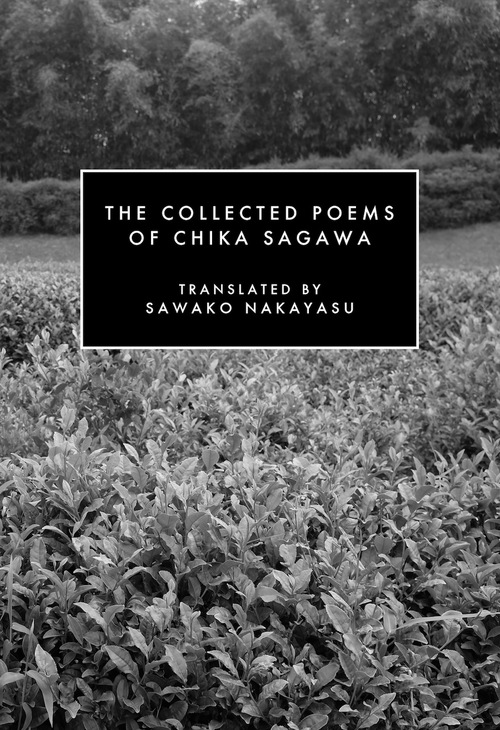 Chika Sagawa’s life seems textbook tragic: a young woman with incredible talent in the male-dominated world of modernist literature, dead from cancer at twenty-four. But that would be a reductive portrait of her. Instead, this first comprehensive collection of Sagawa’s poems and prose—diary excerpts, notes and reviews, vignettes that read like prose poems—reveals a complex and assured voice, one in constant expansion, always seeking new poetics.

I’d discovered Sawako Nakayasu through her work as an editor on Four From Japan, a beautiful volume from Belladonna Books featuring four contemporary Japanese women writers. Here she can fully showcase her talent as a translator: the poems in English possess a musicality and a substance of their own. Nakayasu’s introduction provides us with the contextual backdrop, reframing Sagawa’s accomplishments as a writer (and a woman writer at that) within the transformations Japan underwent in the first half of the twentieth century, including notes on the publication history and close readings of a few poems as well. For non-Japanese speakers, her insightful remarks on the multilingual strategies of the esprit nouveau poets shed light on the myriad ways meaning can be created in Japanese. She thus explains that “it is probably no coincidence, then, that the pen name ‘Sagawa’ is written with the characters ‘left’ and ‘river,’ most likely alluding to the left bank of the Seine—the intellectual headquarters of Parisian artists and writers.”

Sagawa is a poet unfettered by borders and boundaries: as she lived in an increasingly cosmopolitan Tokyo, she straddled old and new forms, claimed Japanese and Western literary influences, collided natural and urban imagery, and took her cues from both literary and visual arts. She claimed, “I believe that the work of a painter is very similar to that of a poet,” and indeed, Nakayasu highlights how Sagawa’s writings can remind us of Cubism, in the way she challenges and collapses traditional perspectives. The presentations of the poems points to a desire to seek new forms—free verse, long prose poems or ones laid out in scenes like brief plays. What’s more, Sagawa was a translator (of Virginia Woolf, Mina Loy, and James Joyce, among others), and Modernist poetry certainly nurtured her affinity for languages, favoring as it did multilingualism, appropriation of foreign words, and intertextuality. To the reader familiar with Western modernism, Sagawa’s voice can bring to mind Mina Loy or Federico García Lorca, but let’s be clear: she eludes any kind of categorization. Sagawa wasn’t just one of the foremost Japanese modernist writers: she created her own modernism.

Elusiveness appears to be Sagawa’s primary modus operandi, supported by pervading surrealism (somewhere along the way, there’s morning wearing a top hat and a rooster donning a “red chapeau”). The incongruity of images effectively displaces our quest for meaning: we must reassess what we thought was normal at every moment. The first poem, titled “Insects,” hinges on a subtle ballet between concealment (night and her “exquisite costume”) and unveiling (“Now I hang my shell out to dry”). The imagery merging speaker and insect is reminiscent of Kafka’s Metamorphosis and serves to amplify the unsettling impression that things never cease shifting and morphing into one another. More generally, for all the whimsy of the surrealistic juxtapositions, something darker is at work; the poems obsessively refer to death, grappling with disruption and destruction. What starts out in roaring laughter, like in “Ribbon of May,” ends in emptiness, and pleasure is located “on the other side of death.”

It must be noted that Modernism developed in a time period when scientific discoveries, colonization and other cultural collisions, and ever more traumatic wars made the artists acutely aware of the fractures and fluctuations of our world. There was fear of chaos—”The center cannot hold,” said Yeats—but also the persistent belief that art may provide the last stronghold of meaning—”these fragments I have shored against my ruin,” said T.S. Eliot. In this perspective, Sagawa is, perhaps, already postmodern, eschewing any link between art and a transcendent order. She seems intimately conscious of how death intermingles with the very act of writing (“The books, ink, and rusty knife seem to be gradually stealing the life out of me”), and how nature itself is no longer a stable refuge against the terrifying imminence of death: “Old love and time are buried, and the earth devours them.” The long sleep winter offers is a façade for the earth’s primeval hunger, against which human constructs—affects, the perception of time—can do nothing. In “Portrait of Winter,” a prose poem embodying the heaviness of ceaseless snowfalls, the only time when vivid color appears is in the mention of blossoms:

(Azalea, apple, and peaches burst into blossom as if burning up out of the surface of the earth, floating vibrantly into the air) (Kerria flowers line the hedge, and the finely clipped velvet leaves are dyed green by the larch trees) […] These things are kept like a forever-lost memory from a distant world.

The parentheses literally encircle and contain the flowers, magnifying the impression of suffocation that arises with the oppressive description of the snow.

But these aren’t poems of despair. The last poem in the collection ends on “Now the horse felt the presence of something warm nearby. / And saw the distant years and months dissipate in an instant.” Here, time abolished does not convey anguish, just as “the goose feathers at the entrance, the inverted shadow” in “The Mad House”—reminders of mortality that make the poem feel like a vanitas painting—lead to the poet stating “I am alive. I thought, I am alive.” Saying I am alive makes it true and acts as a shield against the disruptive force of the shadows. Writing against what she calls “the illusion of darkness,” Chika Sagawa embraces instability, movement, and disruption, reasserts the performative power of poetry, and establishes herself as a fundamental voice in Modernist literature.

AK Afferez is a writer, translator, avid traveler, and sporadic blogger with a fondness for aliases (real name: Héloïse). She grew up in Michigan, studied for a bit on the East Coast, and currently lives in France.