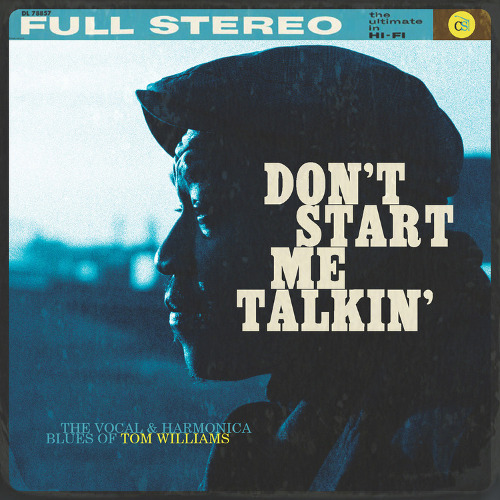 I’m sitting down in Rosie’s reading Tom Williams’ novel Don’t Start Me Talkin’, thinking about the title song and how, like so many blues songs, it’s a secret door: press on it the right way and a series of passageways opens up. Maybe you enter at the New York Dolls’ 1974 nostalgia-turned-inside-out version on Too Much Too Soon, catch James Cotton tearing it up at Winterland in 1972, jump to Dylan spitting lyrics he might have been making up on the spot with an unknown L.A. punk band, The Plugz, on Letterman in 1984—one way or another, you end up with Sonny Boy Williamson II’s swaggering 1955 version for Checkers, a subsidiary of Chess Records. Williamson’s harp soars, seemingly more confident than his trembling vocals until that final chorus when he shouts a promise to “break up this signifyin’ / ’cause somebody’s got to go.”

In Don’t Start Me Talkin’, Williams’ rollicking and incisive novel, everybody’s signifyin’. At first glance it would seem the worst offenders are the novel’s two protagonists, Brother Ben and Silent Sam, a blues duo we follow on tour across the United States. Called the Last of the True Delta Bluesmen, Brother Ben is actually Wilton Mabry, a black American man who enjoys golf, health food, and jazz, and who won’t drink the Old Crow his fans keep giving him. Narrating the book is Peter Andrew Owens, who plays at being Silent Sam, Ben’s young sidekick, a Southern black man of few words who’ll take the harp over rap any day. In reality Pete is a college-educated blues harp aficionado from Troy, Michigan, who uses the word “seddity” in his thoughts.

The difference between Brother Ben and Silent Sam and the rest of the academic hucksters, con-artist club owners and play actors we meet in Don’t Start Me Talkin’ is that they’re good at what they do. Damn good. In a series of scenes laced through the book, Williams conjures the thrill of their performances, the raw powerful music they create not as museum pieces, advocates for the blues, or representations of American culture, race, musicology, et cetera, but as living, working musicians chasing the sublime every night. Unlike the cast of reporters, professors, hipster musicians and hip-hop artists in the book who convince themselves of their lies, Mabry knows it’s the music that counts, and knows that he and Pete can reach a level few can. Who cares if it’s an act? “The first duty in life … is to adopt a pose,” says Mabry, quoting Oscar Wilde, but it’s Pete as Silent Sam who sums it up best later in the book: “Blues is true.”

It takes Pete awhile to learn that, or to know what it means when he says it. His growing discomfort with the act is the basis of the novel’s tension. “I want to know it’s worth it,” he says later in the book to Brother Ben’s former sidekick, Heywood “Razor” Sharp. “That the act doesn’t ruin how much the music means to me. But I look out in the crowd every night and never see just what I’m looking for.” What he’s looking for are black American faces in the crowd, which to him would signify the legitimacy and authenticity underneath this purposefully ragged show he and Ben put on, complete with vintage suits, pawn shop guitars, and a ’76 Fleetwood Brougham. Pete is acutely aware of race in the world around him, of Ben’s “pecan-colored” skin tone, his own darker complexion, of the black bouncers, barbacks, security guards, the rappers N2K Posse and their manager, a “fashionable brother” named Darlton Fuller who has a “GQ wardrobe” and winces when Ben mentions chitlins. But Pete also sees and hears the ties between authenticity and race in the history of the blues, in its musical ghosts and living legends, from the fictional gospel-blues duo Blind Deacon Roland and the Professor, Ben and Sam’s greatest competition for the Best Traditional Act at the Beale Street Blues awards, to Robert Johnson, Little Walter, and his hero Sonny Boy Williamson II. (Presumably Pete hasn’t seen the footage of Williamson performing “Nine Below Zero,” which you can find now on YouTube. It’s the late 1950s or early 1960s, and Williamson gives a riveting performance. His harp playing sounds like a cat wallowing in anguish. Five minutes in, the camera finally cuts from the stage to the audience, which is comprised entirely of white people in formal gear.)

When the duo wins Best Traditional Act, the award is handed to them by the very much nonfictional Robert Junior Lockwood, truly the last living link to Robert Johnson at the time. (Lockwood was partly raised by Johnson, and, as Pete marvels at, played with his hero Sonny Boy Williamson II.) After Ben gives a speech thanking all of his past partners, including himself as the fake and reviled manager, Wilton Mabry, he cedes the mic to Silent Sam—and not for the first time in the book does Pete consider blowing the whole thing wide open. That exposure is the constant threat they live under; Mabry is painfully careful, scolding Pete for playing a pickup gig with a blues band the night before the awards and refusing to let him jam with Robert Junior. At any minute, their act could come undone, and Pete could be the one to undo it because of his guilt and anxiety.

But it’s the year 2000, and Mabry knows what Pete is still learning: in the contemporary age, you make your own authenticity. In fact, it’s an old strategy, used to get by, to get power, to stay alive. Sonny Boy Williamson II went by Rice Miller and Little Boy Blue; he became the second Sonny Boy because of his sponsorship of King Biscuit flour and rolled with it, claiming he was born before the original Sonny Boy. In the novel, Ben plays ten years older than he is; normally his attitude is reserved and polite, but when called for, he gins up outrage and threatens to call his manager: himself, going by his given name. In one of the book’s most poignant scenes, the duo is pulled over in Florida and faced with the aggression of a white Southern police officer; Ben becomes Wilton, a fumbling retiree looking for a condo with his son, on the verge of tears. He is a superb actor, and the books underscores how useful if not necessary it is for a person of color to be such an actor in America.

Sequestered in Rosie’s, I’m thinking about how, in a review of Greil Marcus’ The History of Rock ‘n’ Roll in Ten Songs, I mentioned Don’t Start Me Talkin’ and said that even if the novel isn’t about Robert Johnson’s life, it might as well be. What I meant by that esoteric footnote evolved from Marcus’ imagining of Johnson’s unlived life and use of a phrase from Bob Dylan’s Chronicles: “an audience far off in the future.” That’s what Pete imagines, but it’s also what Mabry is prepping for, as we find out. At the same time, with more funk than fundamentals, you can imagine Johnson becoming a master of his own legends has he lived, like Mabry does as Brother Ben, turning his myths into profits, shielding his private truths from the public eye as that public finally came to know who he was. I also like to imagine Robert Johnson driving around on a golf course.

Don’t Start Me Talkin’ is a contemporary picaresque, a series of riffs and encounters revolving around the questions of authenticity, ethnicity, the private self and the public self, and blues music. Midway through, the plot lags a bit, the promise of a showdown over this crafted act starting to feel like a tease. Acutely, Williams shifts the book into a second gear at the Beale Street Blues awards, when the threat from without turns into a division between Mabry and Pete. Soon Pete finally gets a bit of redemption, or thinks he does. Throughout the novel he thinks he’s been hearing the one original song he recorded with Brother Ben on the radio; he has, but it’s a sample used by the up-and-coming N2K Posse. Turns out Mabry licensed the sample for the money, popularity, and, in a shrewd move, the sympathy it would garner for Brother Ben among his traditionalist faithful. If the satire perhaps reaches too far when Ben and Sam are invited to the Posse’s show at Madison Square Garden—it is the only scene in the book that feels manufactured, too hard to believe—then its purpose is keen and double-edged: here are young black Americans reaching a young black American audience, much to Pete’s chagrin. How the blues might ever regain its following is a question left unanswered by the book, though Heywood reminds Pete that the blues is cyclical.

The author of a novella, The Mimic’s Own Voice, and Chair of the English Department at Morehead State University, Williams has a sharp eye for the right detail; nothing captures the playful but earnest satire of the book better than Brother Ben’s gold teeth sleeves, worn only in public, of course. And as much as satire depends on such detail, it wouldn’t cling to the reader without the richness of character Williams writes into Mabry and Pete. Brother Ben/Mabry is elusive yet unspectacular, annoyingly furtive yet ultimately concerned with educating Pete; he has commercial acumen, the instincts of the veteran musician he is, and an entirely convincing approach to getting through the grind of touring. (Hints: Don’t drink so damn much. Eat healthy. Get some sleep.) Silent Sam/Pete struggles with his duality, faces off with his middle-class and worried mother, yearns for success and fame but quite honestly wouldn’t yet know what to do with it. His disdain for rap is real, but he turns his nose up, somewhat, at the deep African-American tradition of jazz, which Ben loves. Most of all, he is lost, kicking against the structure and satisfaction touring as Sam provides yet caught up in the act and in the genuine joy of making this music. “[W]here I belong other than the stage is still an open question,” he says early on, and if the book never exactly answers that question, it shows that he does indeed belong onstage.

There’s a stage down in Rosie’s. In fact, Rosie’s is just a stage. There’s a stage in your barbershop, in your college classroom, in your own apartment. Using the road-trip story, Williams shows us that we don’t need to go on the road to find a stage, that we’re always playing roles to not only get what we want, but to figure out what we want in the first place. Don’t Start Me Talkin’ peels back layers upon layers, opens that secret door, and as much as it dials in to the concerns of black Americans—finding and hitting frequencies and notes which speak to Ferguson and Baltimore, to how images and personae of young black American men are created and repeated in the public sphere—the novel also shows that we’re all trying to pass as whomever we think we need to be. But, like Brother Ben and Sam, Williams creates a special music that expresses the truth of that condition, which is a rare talent indeed.

Robert Loss is an assistant professor in the English and Philosophy Department at Columbus College of Art and Design. His work has appeared in Los Angeles Review of Books, Public Books, and PopMatters, among others.