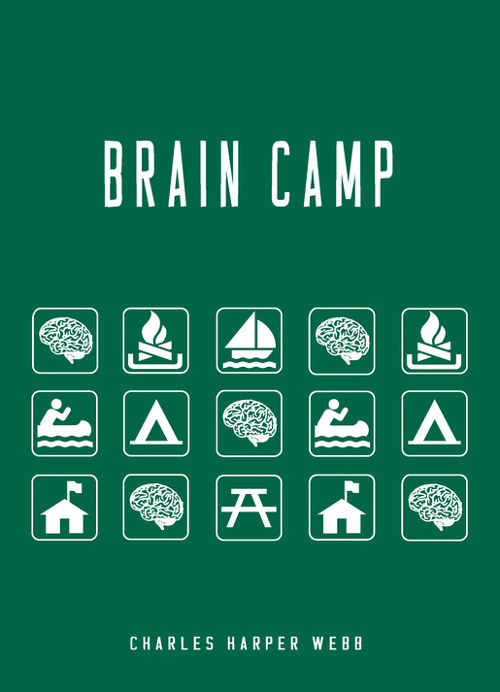 “[H]eadlights lance the air,” Charles Harper Webb writes in “Questionable,” a poem about teenagers parking in the “night-woods.” This stunning image might serve as a metaphor for what Webb does in all of the poems in Brain Camp. Concerned primarily with the passage of time, the collection contains both deeply personal poems and critiques of contemporary culture, particularly its reliance on empty language and its inability to speak to the mystery of simply being here—and then not being here. Crafted with Webb’s sense of humor, these “critiques” are not sterile, didactic poems, but refreshing guffaws at bullshit. Plato is often credited with saying, “Time is the moving image of reality.” In Webb’s world, however, things don’t go away; they go invisible, and his poems capture them in all their vividness before they disappear.

After prefacing the collection with “Dedication,” an ode to radio DJs and the rite of passage of dedicating songs to crushes, Webb quickly turns his attention to death in “Moth” and “Winter Song.” “The soul, as we know, is a gray moth / at the center of the brain,” he writes in “Moth.” The speaker tells us that when we die, the soul flies “to the nearest / tree, where it settles on a leaf (if there aren’t / leaves, a twig will do), and seeps inside,” which is “why children rake leaves into mountains // to slide down, and why men fire up / a pile of leaves on a cold day, and stare // into the blaze, and will say only, ‘I like / the smell. ‘I like the heat.’ ‘I like the light.’” At the end of “Winter Song,” the speaker says, “Pain is foreplay to pleasure. / Nothingness is Something New. Death will be / the earth’s arms reaching out to cradle me.” These images of mortality “cradle” the reader, too, easing us into an acceptance of the inevitable, something that science and medicine, for all their wonders, cannot do.

Further examining the conflict between science and poetry in “Explanations,” Webb writes:

The sun as God’s eye; yolk of the sky-bird’s egg;
gold vagina giving birth to day—all seem more
likely than a ball of hydrogen fusing, at fifteen
million degrees, ninety-three million miles away.

Of course, the fact is that the sun is a ball of hydrogen fusing at millions of degrees, millions of miles away, but the fact fails to satisfy something in us, and the poem reminds us that science isn’t as stable and permanent as it seems: “One war, one plague, and we may kneel again to those / who swear that rivers freeze when water sprites / hug tight for warmth.” This scenario presents its own set of problems, like “(s)ome prophet” who decrees, “’God / wants your blood!’” However, as the speaker of the poem says, “when Science sinks / back into the unknown, we may be happy to believe / the dead shed bodies the way snakes shed skins.”

“Brain Camp” also takes up this theme, listing the things that kids no longer do at summer camps: canoeing, campfire sing-alongs, “archery, homesickness, marshmallow- / dripping s’mores,” fishing, and sleeping under stars. Instead, they are “sawing through skulls, peeling off the dura mater, / pia mater, and arachnoid to explore the gray matter inside.” They are “dropping a line in the cerebral aqueduct; dragging up // the amygdala from limbic depths, dripping.” Instead of “dangling, tacked // to a cliff face over an abyss,” they are “bending to see / the mountains of awareness rise: the mind’s range / moving off in silver mist….” The conflation of the brain dissection with natural imagery shows the difficulty of separating the physical brain from the phenomena of the mind. Even as the campers attempt to isolate and divide the brain into tangible parts, it turns into a metaphor-making machine, and the metaphors and images are as real as the anatomy that produces them.

While contemporary culture revels in scientific, mechanical, and technological precision, it also seems to revel in obscure language, murked up with gratuitous irony and the hollow gonging of advertising. In “Postmodernism Missed the Opry,” Webb celebrates the sincerity of country music, writing, “If old George sings, ‘I’ll love you till I die,’ / he isn’t kidding; call a hearse.” Later, he writes, “Aesthetic distance is the valley between / mountains full of deer, trout, bobwhites, / and the pine-shaded shack where you were born.” We’re told that “Postmodern is a city boy who’s never been / so lonesome he could cry.” The poem, however, is a postmodern poem and ends on a playful note: Postmodernism “hides / in an ice chest that should be full of longnecks, / his really and truly cold, cold heart.” In “How Can I Exceed Your Expectations?,” a poem that takes its title from a “bank employee, answering the phone,” Webb literalizes the employee’s meaningless offer (required, no doubt, by the bank) into a hyperbolic litany that exposes the absurdity of such statements. The poem ends:

The next time some teller at your bank chirps, ‘Next guest, please,’
Give me a nice meal, a strong Margarita, and warm bed in a
room with a fireplace, for free—

Plus honest-to-God sadness when I leave.

In “ Respect,” “Why Are People So Mean?,” “Use of Force,” “In the Face, Hard,” “Praying Mantis on a Chain-Link Fence,” “Strangers,” and “Woe to the Defeated,” Webb acknowledges and accepts (without necessarily endorsing) the human capacity and occasional desire for violence. “Respect” is about Kostya Tszyu, an Australian boxer, throwing in the towel in a fight with Ricky Hatton. Near the end of the fight, Hatton was pounding Tszyu, and while throwing in the towel was the smart thing to do, it was an act that diminished all of the accomplishments of Tszyu’s career and cost him the respect of his fans, who laud Mohammad Ali, “a living bobblehead,” and the brain-damaged fighter Ruben Contreras for not quitting. “Use of Force” tells us, “Now Law has seized a force-monopoly. Yet even pacifists // long (secretly) to Shock-and-Awe their enemies.” In “Woe to the Defeated,” a poem about the Celtic warrior Brennus, the speaker says, “Oracles foresee a time…when children will watch, on glowing boxes, // a mouse, beaver, skunk, and squirrel attend a school / where they learn to chime, ‘Hurray / for differences!’—not to slaughter, enslave, // or even mock the weak, but to love everyone.” The poem ends, “Trust me, that time is not today.” Webb doesn’t seem to want to return to the time of Brennus, but this, too, is a part of who we are.

Brain Camp contains several personal poems prompted by the realization of death. In “My Son Dreams That a Shark Ate Me,” Webb writes, “I sit alone, my life’s small lamp fighting / to hold back—at least until he can swim / on his own—the hungry shadows circling.” In “Nada,” an apology and a confession, the speaker addresses his sister: “Nada, who helped our parents shrink // toward death while I grew fat on life—Nada, / your virtues vast as space—you had a head; / there was nothing wrong with you.” Despite the awkwardness, absurdity, and cruelty of life, the last poem in the collection assures us that “The Good Survives”: “Not the boy drowned // in a backyard pool, the girl’s heart missing beats, then lying still. The way she’d lift her arms up // from her crib, and say, ‘Kiss. Kiss.’ The way he’d throw / open the bedroom door, and say, ‘Daddy, it’s day.’” Brain Camp presents a complete picture of life, freezing the moving images of reality and affirming the redemptive power of poetry.

Jordan Sanderson grew up in Hattiesburg, Mississippi, and earned a PhD from the Center for Writers at the University of Southern Mississippi. His work has appeared in several journals, including Better: A Journal of Culture and Lit, Gigantic Sequins, Red Earth Review, burntdistrict and Caketrain, and he is the author of two chapbooks, The Formulas (ELJ Publications, 2014) and Abattoir (forthcoming from Slash Pine Press). Jordan’s critical work has appeared in The Hollins Critic, Heavy Feather Review, and Alehouse, among other journals. He currently lives on the Mississippi Gulf Coast.