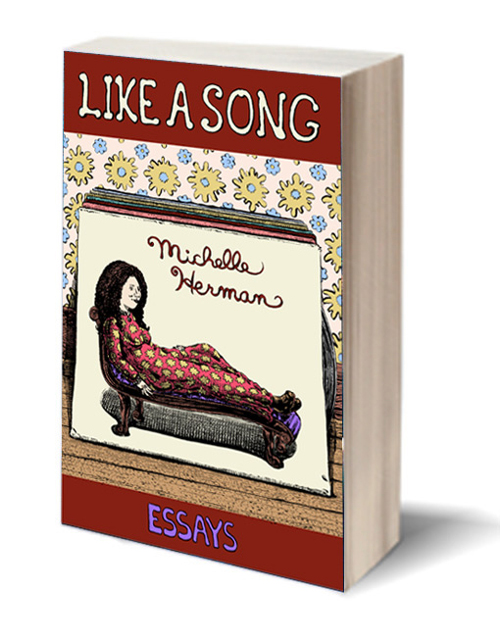 Reading Michelle Herman’s essays is like sitting down with a friend over coffee and discussing life, love, TV, and parenting. She’s conversational and intimate, and she makes this kind of writing look easy. Don’t let that fool you, though: her work is carefully and beautifully crafted, and her recent collection, Like a Song, is no exception.

The relationship between Herman and her daughter, Grace, threads through the collection. One of its most moving essays, “Idolatry,” focuses on a period in which Herman watched American Idol with her daughter. Grace had been studious and serious as a young child, but she starts changing and evolving while watching American Idol with her mom in her preteen years. Though ostensibly about the famous talent show, this essay also shows a mother seeking a common ground with her daughter, trying to find a common language, and ultimately discovering ways that their perspectives and passions entwine.

The collection’s first essay, “Performance,” begins with a meditation on professionalism. We hear that as a young child, Grace had declared herself a farmer. Not long after that, she became a paleontologist. Later, inspired, perhaps, by American Idol, she wanted to become a pop star. In narrating and examining these different phases of her daughter’s life, Herman looks at what it means to have a profession, and at how professions do and don’t define us.

In one moving section, the essay describes how when Grace auditions for a cappella groups in college, she uses songs her mother had taught her years before: “She hadn’t even realized she already knew some of the songs she’d picked until she started practicing them. Then all at once they came back to her, she said, and she could hear me, in her mind. She could hear me, and she could see us—fifteen, sixteen years ago—in the dark together as I sang to her, song after song.” We don’t always know how we’re influencing our children, but this essay shows how deeply Herman influenced Grace from an early age, how Grace has remembered and made use of nearly everything her mother ever said and did.

In following her daughter’s professions and passions, Herman explores her own as well. One of the collection’s trajectories is Herman’s own discovery of singing in mid-life, after Grace leaves home for college. After spending years listening to her daughter’s high school choirs and voice lessons, Herman decides that she herself wants to join a choir. She goes through months searching exhaustively for just the right choir, and she finally finds exactly the right one: Harmony Project. It’s a group in Columbus, Ohio, that devotes itself not just to singing, but also to community service. And it’s this combination of music and service that makes it the perfect choir for Herman. She describes her experiences singing with the group, and she also explores also how much she loves meeting people from all walks of life—teachers and scientists, risk analysts and social workers. Her love of the service component, she realizes, is related to the fact that Grace has left home for college, and Herman needs a new service calling. For many years, she served the world by raising her daughter. Now that her daughter is growing up, Harmony Project can fill the gap.

Herman, who teaches creative writing and directs the MFA program at The Ohio State University, also explores why she’s made the choices she has to become a writer and teacher, and how these relate to her secondary, later-in-life rediscovery of her love of singing and music. In the final essay, she looks at what led her to become a writer—in particular her love of talking, and the way that writing gives her a way to talk on the page. And that love of talking also made teaching an ideal career for her, since teaching is, at least in part, a matter of talking.

Ironically, though, Herman discovers that she loves singing because it’s different from talking. It silences her speaking voice and involves pure performance. She finds, too, that singing is a good complement to her writing and teaching career. As she says at the end of the final essay, “Ah, but singing! When I sing, the flow of words comes to a sudden halt. On the seesaw between words and silence, I am at the fulcrum—balanced. I’m quiet, for once. But all you hear is my voice.”

Herman’s voice in these essays is personal and informal, drawing the reader into her world, showing how she thinks, what she feels, what she worries over. And ultimately, it’s a deeply musical voice, one that sings on the page, that uses rhythm and cadence to explore life’s problems and mysteries, yearnings and discoveries, disappointments and joys.

Vivian Wagner, author of Fiddle: One Woman, Four Strings, and 8,000 Miles of Music, is an associate professor of English at Muskingum University in New Concord, Ohio.