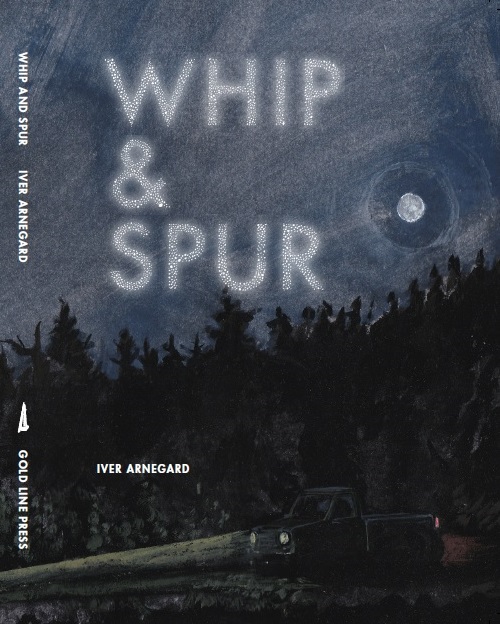 In his collection Whip & Spur, Iver Arnegard writes wildness and isolation—the desert mesa, winter in Montana, the middle-of-nowhereness of North Dakota—places where making it to tomorrow is a daily occupation. For those who may be conjuring ideas of bucolic streams and lazy bunny-filled vistas—these are not those stories. Instead of romanticizing the rural, Arnegard shows its starkness and what it means to be truly alone. With bone-bare language and deliberate pacing, he depicts solitary lives, near-wilderness as the setting. While I wouldn’t call his characters marginal, they are on the verge, their lives so tenuous that the reader can imagine them wisping away without much notice. “It’s amazing what we’re capable of when it comes to survival,” says the unnamed narrator in “Bone Saw.” Indeed.

Congratulations on winning the Gold Line Press Fiction Award. How pivotal has the prize been for you?

I was in a slump. Really discouraged. And thinking about giving up on my writing. But before totally throwing in the towel I decided that I would submit my work to every journal, editor, agent, and contest I could find. Then, after they all rejected me, I’d let myself quit, guilt-free. Gold Line Press was running one of those contests. I was coming back from Christmas in North Dakota, driving west across Wyoming. The sun was setting behind the Laramie Mountains—the snowy prairie reflecting the fire of that huge sky—when Gold Line called to tell me I’d won and that they wanted to publish Whip & Spur. I’ll always remember that as one of the best moments of my life!

I was struck by the fact that in many of your stories, the main characters aren’t named, but are instead referred to, for example: “the man” in “Ice Fishing.” Can you say a few things about that strategy?

I guess I’m usually going for something archetypal. Universal. I want my stories to be more about the relatable themes, feelings, and emotions—love, loss, longing rather than being bogged down by detail. Specifics, like exact names or precise dates and times. I think that omitting characters’ names gives my readers more work to do. And by work, I mean interpretation. Imagination. My favorite writing doesn’t spell everything out or hit me over the head with meaning—what I’m supposed to make of it all. As a reader, I don’t want too much explicit, or blatant, instruction. I want to fill in the gaps with my own parts of the story, the way great impressionistic paintings leave so much up to the viewer. And I’m drawn to archetypal work myself. Stories about characters and settings that are somewhat timeless. I try to emulate that in my writing.

The language you employ is very spare, which mimics or evokes a barren landscape. I also noticed it was particularly minimal when you write scenes wherein a main character suffers loss, but then fills out a bit for flashbacks. Can you talk a bit about the cadence of the story?

I guess I’m just not a fan of verbose writing. I like it lean. Skeletal. Laconic. And luckily that sort of minimalist prose does a good job of reflecting and informing the unpopulated landscapes I’m so drawn to—in both life and in my writing. Places that are remote, desolate, hard to survive. In this case, I guess the austere landscape lends itself to that kind of minimal prose, whereas the flashbacks seem to require a little more fleshing out.

I love this line of yours from “Ice Fishing”: “Now the sun’s down, and the cold has its own weight, like something with mass, something the man has to push his way through.” Tell us a bit about your relationship to wintry remote landscapes.

Between Alaska, Montana, and North Dakota, I’ve inhabited some pretty cold places. Serious cold. Not just ordinary cold. I started coming up with some of the lines for “Ice Fishing” on Georgetown Lake, Montana, while freezing my ass off above a hole I’d cut through three feet of ice. It was way below zero that day, and I remember thinking it was the kind of cold that was much less abstract or ethereal than ordinary cold. That day, even the temperature was tangible, palpable.

You have a strangers-turning-up-in-the-middle-of-nowhere thing going on. It’s kind of tantalizing, because the idea is both terrifying and a relief. It’s a spin on the “stranger comes to town” device, except there is no town. It’s an entirely different event when a random person turns up in a remote locale.

I think it’s an effective way to build tension and rev up a narrative that could be potentially starting to drag a little. When in doubt, invent an unstable character and plant them in the middle of nowhere. Somewhere they’ve never been before and somewhere they don’t belong. Maybe they’re broken-down or lost. Or both. Of course I don’t consciously think strategy like that when I write. I wish I did. For me, it’s much more visceral. I’d like to call it instinct or intuition, but to be honest, I think I just kind of flail and fumble around till something “works” or “feels right”—in my writing and in my own life. But more than anything, the wild, unpredictable stranger-turning-up-in-the-middle-of-nowhere is a character I like, one that I’m drawn to, and one I relate to a little too well.

There is a sort of lack of a specific era in these stories. I’m wondering if that has something to do with how we are affected by rural landscapes and the characters who inhabit them?

Yes. I think those kinds of landscape are more timeless than most urban settings. And those landscapes speak to my sensibilities. I’m an anachronism. I would’ve been much more suited to a wilder era. I spend as much time as I can losing myself in wild places. Mountains. Canyons. Deserts. Tundra. It doesn’t matter, as long as it feels untamed. Puts me back in time, so to speak. It’s ridiculous, really. Sometimes I deliberately don’t take maps with me so I can feel like the explorer I was born to be. But I also think there’s some value in that kind of risky, pathological sort of recreation. The world is mapped out. Settled. Every square inch monitored by satellites and computers, maybe even drones. And that’s sad to me, because we’ve also lost part of our connection to the natural world, whatever that term means anymore, and therefore a part of our humanity. My fiction, like my life, is an attempt to get some of that back. Or pretend to. Anyway, it’s all pure fantasy at this point, right? Damn near. So yeah, my writing is an attempt to combat all of that. To put the natural world back at center stage where it belongs. Because, after all, we are still subordinate to natural cycles, the elements, mortality, no matter how much the modern world and all of its technology tries to insulate us from all of that.

There is a tendency to romanticize the rural life, something you overcome. Can you talk about writing the aloneness and hunger of living this way?

Hm. I was raised to romanticize the rural life. Been driving grain trucks and tractors since I was twelve. Farming off and on my whole life. And moving to Alaska was a dream of mine for as long as I can remember, because I love wild places but also because I was raised with a fierce sense of independence and autonomy. Maybe to a fault. I’ve aspired to those “virtues” for as long as I can remember.

The characters in my stories are hopelessly tied to those beliefs along with me. In my writing, all of these ideas that are such fundamental parts of who I am keep seeping out between the lines. Boiling to the surface. And for as long as they’re important to me, these themes will continue to be major parts of my work. Thanks to my writing, I’ll be processing all of this—trying to sort if all out—for the rest of my life.

They’re austere stories. Some people would, and have, called them depressing. Thing is I’m a really happy guy. Sure, I’ve had brief bouts with depression. One or two anxiety attacks on the streets of Beirut. But I think they were appropriate and called for at the time. But I have a great life that just keeps getting better. I’ve always been fortunate. I’m just an empath. I absorb other people’s emotions and sadness way too much. I have for as long as I can remember. But in aloneness and hunger, there is tension that works well for writing. There is a way of living conducive to storytelling, which is a way of reaching out, communicating, and bridging the gaps of that same loneliness. And because of that hunger, there are stories that must be told.

Linda Michel-Cassidy is a writer and artist living in Arroyo Seco, a tiny rural village in northern New Mexico. She has taught metalsmithing to jaded college students, mentored middle schoolers in creative writing and facilitated installation art with kindergartners. When all that isn’t going on, there is way too much skiing. She received an MFA (visual arts) from the California College of the Arts and is an MFA candidate in fiction at Bennington. She has published stories and essays in a number of small journals, and is a reader for some larger ones.