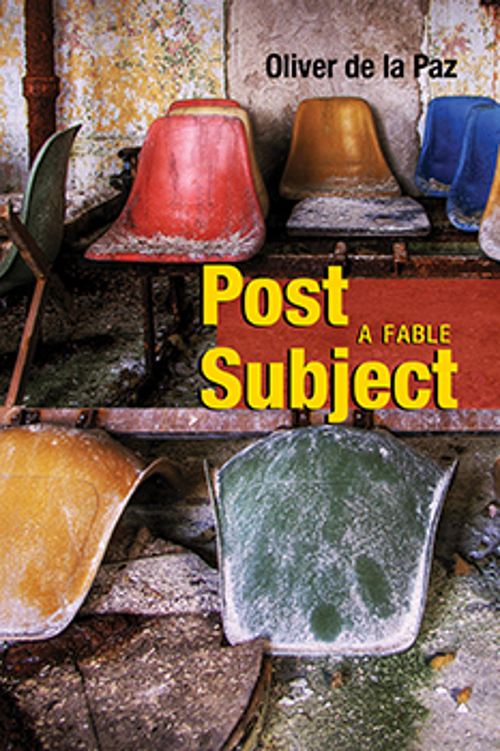 Each poem takes on a single subject of this fablistic world, such as walls, the dead, horizons, interstates, docks. There are no rules as to what is or isn’t inside this world, and seemingly everything in existence is a part of the world, which makes it very hard to distinguish it from our own world, which is probably part of the point. But within this immense world, several threads weave their way in and out of the poems, like the existence of hierarchy and control and exploitation and repression (represented by the Empire), art and the artistic endeavor and its purpose (there is a painter who appears sporadically, along with her son, who both are in a subtle battle with the Empire), and a constant juxtaposition of images of civilization and their destruction.

Regardless, in this book, the attention to sound and alliteration and language in general is superb. de la Paz relies upon imagery and word choice to do most of the work—that and the first line of each poem to set the parameters. There is very little that is overt or direct, even though there is a lot of plain language and subject matter. The focus is on creating a miniature world on each page, to put the reader into the world and to let us feel around in its oddness, in its juxtapositions and contradictions.

Because this book reads more as a showing rather than a telling, readers may feel unsure what to walk away with. I walked away with anger, questions, confusion, beauty, awe, some more anger and questions, and a distinct feeling that something is always happening within every event in life. There is an uneasiness throughout this book that made me pause and wonder how much of my own world, of our world, is in it and how much is fable. The majority of the book felt real to me, felt like a direct comment on what it means to be an animal, an artist, a lover, a plotter, a revolutionist, a zealot, a searcher, a parent, a sibling while under the darkening sky of the Empire.

Even the most mundane act is infected by The Empire. For example, in “Dear Empire: These are your bridges,” we get this opening strophe/paragraph: “These are your bridges. They rise high above the depths. And therefore, they control the depths. Are they a way to avert? A desire or a distance? I’m unsure, though their spires remind me of the backs of sleepers.” If you deleted ‘your’ in the first sentence, then this reads very differently. The bridges would have agency, but because the bridges are the Empire’s, suddenly they become something different even if they are inanimate. “They rise high above the depths.” gives agency to the bridges, but not exactly to the bridges, but rather to the Empire controlling them. It is an interesting turn of feeling for an inanimate object. And this turn happens on every single page. By turning everything into something the Empire controls, wholly, we are left in the shadow forever, and as the book progresses, it feels more and more like we as readers and the speaker are simply trying to find a way to exist despite the infinity of the Empire.

However, because the Empire is never clearly defined, never given a face or leader or name (beyond the Empire)—or even a history or an exact location—we are allowed to imagine what we want about its beginnings and goals. One reading is that the Empire is art or writing or creativity. It’s something that infects our lives in every way every day, something we live within even when not directly engaging with it. It’s true that our desire as artists follows us all the time, not in a “you should write a poem about that” kind of way, but art is always with us because we are artists. It’s inevitable. We cannot escape the impulse to be us. That’s the Empire, the unescapable pulse.

Or, maybe the Empire is America, fear, or discrimination. My first thought was America at its worst. America the conquerer of the West, spreading fear and repression and death and disease, the whole history. Then I moved to history: Ottoman, Roman, etc. And while there are pieces in the book that make it modern like cars, it still doesn’t rule out history, because we’re in the land of fable. That’s the terror and beauty of this book: it is simultaneously distant and close, foreign and personal.

However, as a whole, this collection felt too long. Actually, no, it didn’t feel too long, because there’s no such thing as too long, only poems or writing that just isn’t working for the reader, which is different for every reader. So, I struggled to finish this book because it simply does the same thing too much. There is too much repetition of style and form without enough variety in theme or tone to give the reader (me) a break. At most, I could read twenty pages at a time before I felt overwhelmed by the style. While the language is fantastic, images whole and filled, there isn’t enough substance; it’s as if each individual poem is meant to be a fable, a whole story of history and future and themes and emotions, but many of them fail to exist on their own beyond themselves, which left me with too many unanswered questions. Several pieces that feel big and complete, ones that warrant rereading and enrich each time you do, but many function as vignettes, quick pictures of one thing.

This is “Dear Empire, [these are your foundries]”:

These are your foundries. Hot swept bricks outside their doors attract the washer women with their wet linens from the river. All along the corridor, metal pours into forms while women dangle white sheets from the guy-wires used to support the thin roof, dangerously close to the molten metal.

But not a thread of fabric is singed, which must be a trick of magic. The sheets rise up like a choir of ghosts as the machinery guides their leaden wares from point to point.

The cloth curls upward like the flesh of a man on fire. The shriek of gears and joints can be heard from many miles away. Sometimes, you can see blankets sail high above the smokestacks like white-winged gulls.

Language: How swept bricks … washer women with their wet linens … women dangle white sheets from the guy-wires … molten metal … singed, which must be a trick of magic … ghosts as the machinery guides … cloth curls … flesh of a man on fire … white-winged gulls. Imagery: much of the same, but especially the closing sentence. Beautiful. Full. Surprising. And the thematic implications of poverty, of destruction or loss because people dry their linens by a foundry rather than an industrial washer, of religion or god or magic that helps the people get by with their day-to-day without it catching fire. But we can’t forget that these foundries are The Empire’s, a lurking beast that owns everything and everyone, even the opposition. So much works for me on the surface.

But, given the poetic flexing in this, I’m not sure what we’re supposed to get from it in the end, on its own. This poem doesn’t function outside of the book, or at least, doesn’t function nearly as well as it does within the context. And most of the poems gave me that feeling, like each poem is a link in a bridge spanning a great ravine: they are nothing without the rest, which goes without saying because they are collected in a work together.

However, this book raises questions about the function of a poem for me. Is a poem, even within a given world or context, expected to function as a poem on its own? Or do we allow that poems need not be individualistic?

Oliver de la Paz’s poems each do function on their own, but in a much more superficial way. Alone we must look at language and image rather than theme or meaning, because in order to get the theme or meaning, you need the other poems, which build upon each other.

This isn’t a criticism, it is a question: How much do poems need to work on their own, in general, but specifically when a part of a concept-book? And de la Paz’s book raised that question. I can enjoy each poem in this collection for itself, for its language and imagery and word choice, but not for larger concepts or what it means to be human or what it means to be subject of an Empire. But maybe individual poems don’t need to do that. Which is very interesting to me as a writer and reader because that means this book and de la Paz put the holistic outcome above the individual accomplishment of a poem, or a word or an image, and that is incredible trust in oneself, in one’s ideas, and in the reader.

Jacob Collins-Wilson is currently earning his MFA in Poetry at Syracuse University and has poetry published or forthcoming in Crack the Spine, Barely South Review, The Finger Literary Magazine, Spillway, Rathalla, and Poetry Quarterly, among others, in addition to being a finalist for the Best of the Net 2013 anthology. He can be reached by everyone at: emailingjacob@gmail.com.