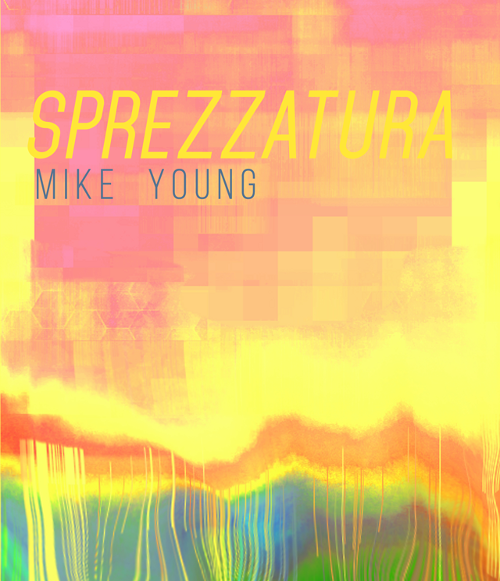 The blurb from BOMB on the back of the book is a clever short litany of makes seem. To make seem is sprezzatura: “A lot of us have tried those / five hour energy things, but that’s how / we put it: tried.” Also, things. What would it say about a person who enjoys them? “Are we to believe they haven’t invented / themselves?” When we generalize, we distance from. When we distance from, the less we’re locked down. Less calculable. What Mike Young does in Sprezzatura is make the seeming visible: “All I have to live for some nights is the joke / I plan to tell tomorrow, the one what will / require I look up the opposite of falsetto / on Wikipedia.”

We would recognize the contemporary version of sprezzatura, which began as the sixteenth century Italian ideal of practiced effortlessness, as “pre-ripped leggings / and boots that look stolen.” But if that’s what it is, what it does is hold up a mirror to our contemporary states of identity, ontology, and feelings.

“If I am here then I am here with / The world is not an argument.” This is the axiomatic premise to our contemporary projections of identity. Imagine Descartes on Instagram: I think, therefore I gram. “To be present in the world / doesn’t make you,” the poet writes. But the elliptical ad lib might be this: To be present on the internet does. Well, and undoes. Turn on the TV to remember your identity, I once wrote in a poem. But Mike Young says it better: “Sometimes Google says I play third base and sometimes she says I am a freelance advocate for diabetes.” Which is to say, turn on your internet for your understanding of identity to be completely dismantled, fractured, or contradicted. Or to question whether you have one at all. Interesting, too, how Google’s gendered. This humanizing tendency. The more human the machine, the less machine is the human. How often do we instinctively naturalize technology, saving it to save ourselves? The impulse isn’t isolated: “How about let’s refer to batteries as—let’s see—wilting, maybe.” Wilting, more desperate than dying? Because there’s still a sliver of hope, that if we just nurture it enough, everything will be okay. Is that what Mike Young is telling us, that everything is going to be okay?

The book is densely populated with the unheimlich. What you see is what you (almost) get. Young upturns our assumptions about language and identity by defamiliarizing situations we’ve grown too comfortable in: “One day I want to sneak up on myself with someone else’s”—stanza break. Someone else’s what, self? No, “dance moves.” But just the page before: “If I can guess someone else’s dance moves before I’ve seen them / execute, I know they have a greater chance of murdering me.”

Sprezzatura is the frightening realization of self-awareness. “Making people laugh is being aware of yourself pretending you’re not.” To recognize that the face in the mirror isn’t actually you. “When we say our own names, we make a weird face.” Now try looking at that. I’m reminded of a passage from Barthes’ Camera Lucida:

In front of the lens, I am at the same time: the one I think I am, the one I want others to think I am, the one the photographer thinks I am, and the one he makes use of to exhibit his art. In other words, a strange action: I do not stop imitating myself, and because of this, each time I am (or let myself be) photographed, I invariably suffer from a sensation of inauthenticity, sometimes of imposture (comparable to certain nightmares).

Without a work like Sprezzatura, which calls out all our efforts at seeming rather than being, we would go on imitating ourselves until all that remains is, I don’t know, a list of online profiles maybe. Digital gestalts. A false whole that is greater than sum of our real parts, because impressions are everything. “People who see me in my glasses get the right impression, which bothers me.” I mean, the only reason for cooking a Thanksgiving turkey is to see how many Likes it will get. “Sometimes I try to make sure the best songs in my iTunes have the most plays, but I don’t know why.”

My goal was to write this in only two pages, and in just a single sitting, but sometimes goals change along the way. Like how when I started, I was drinking a sazerac and having a bagel at 10 in the morning, and now, I’m at my new desk job at an ad firm, desperately trying to think of a word that means drive and relentless and, and something else, all at the same time. To make it seem like it just appeared out of the ether.

Sprezzatura digs into the problematic relationship between language and meaning. For example, “For this falafel-sized falafel, I was given an un- / falafel sized bag.” I check the ticket stub in my pocket. Years, yours, etc. Well then, falafel-sized bags, isn’t that what they should do? It’s the ontological Cinderella slipper. Trying to find the language that fits its meaning. But it’s never that easy: “One thing detectives should remember // is everyone can fit into shoes one size larger.”

It’s a disorienting experience, when is-ness isn’t—“The page with the lyrics you searched for / starts to play a different song.” Things are both themselves and not themselves. Ain’t no thang but a chicken wang. But there’s also a form of comfort in that unreliability of naming: “Don’t worry so much about the news / mispronouncing your name.” (The first line hints at a contemporary exemption from global accountability, and the follow up confirms it by reminding you everything can be just haha as long as it’s still about you.) But what is in the act of signifying anyway?: “Inside [a red circle without any no-no line] could go the horrifying / significance in my life of the word / Boingo.” Not only does Young play here on the importance of words for a poet, but he picks a totally (seeming) arbitrary word to demonstrate it, and reiterates the idea in the line that immediately follows: “Hey, let’s get somebody named, / I don’t know, Jason!”

But at the heart of a work about posturing is a deep and earnest preoccupation with feeling. There are sixteen poems called “WHAT IS THE STRONGEST THING YOU’VE EVER FELT / WHAT IS THE STRANGEST THING YOU’VE EVER FELT,” because feelings are strange, it’s true, especially when they’re so often constructed for the sake of remembering. How many soundtracks have we written for ourselves? But this is dangerous. “Feelings are not a project. Then they end. I’m not kidding: be a little careful. You don’t get three tries for a true or false.” I’m not sure how I’m supposed to take this seeming sincerity in a poem where people are being scored on the emphasis and extension of their high fives, but for whatever reason, I believe it. And I believe it because of this:

This is rubbing your hands over the ribs of what feeling feels like, getting the heat and probably some wetness of its breath, rather than looking at it aggrandized, cropped and filter-glossed in X-PRO II, getting Liked like crazy.

I believe it because there’s the desperation of being, of feeling as being, of realizing how strange it is to be and feel like anything at all. And much more so, to be a part of things. Of others, and of others’ others.

I got chills when I read the last line of Sprezzatura, but I’d also just taken the first sip of a sazerac, so maybe it was that. It’s a Monday morning, and I’m in a coffee shop eating a bagel and drinking a sazerac and typing on my MacBook Pro about a book of poems that deal with what happens between the time the hand reaches into the hat and when the rabbit comes out. And you know what I hate? I hate being behind someone who is standing on an escalator, because I need to get somewhere. And I hate that I hate that so much, but, at least in Europe there’s a system for escalator etiquette, so what’s our excuse? I don’t know why that feels relevant now, and Mike, I’m sorry that I’ve just made this about me instead of your book. All I know is the thought of someone you barely even know leaving their place in a long line just to come over and say hello is probably the most beautiful and human act I can think of.

Daniel Scott Parker is a poet, artist, and collaborator working across and between disciplines. He is currently based in Chicago, where he’s a co-curator for THE SWELL, an art cooperative and performance series. He has an MFA in Poetry from Columbia College Chicago and is the author of the chapbooks L’esprit de l’escalier (Chantepleure Press, 2013) and (i.e., jump) (Two Steps Press, 2014). His poems and poem-films have appeared or are forthcoming in publications like Coconut, RealPoetik, Spork Press, Ghost Proposal, Heavy Feather Review, and others.