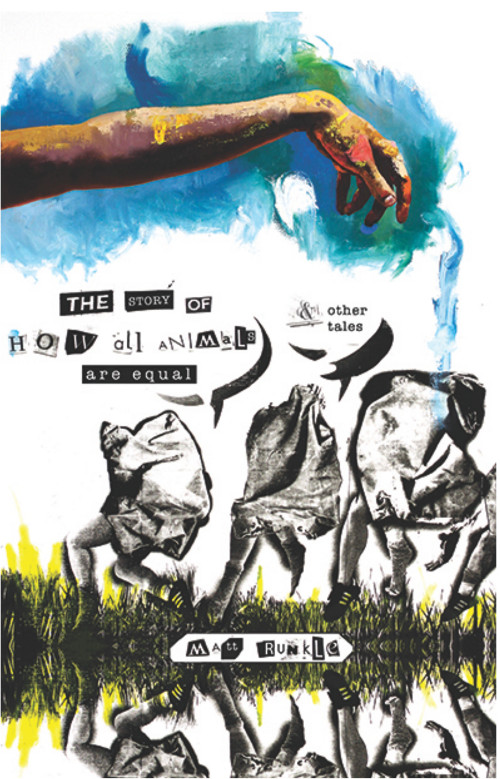 The title of Matt Runkle’s forthcoming short story collection, The Story of How All Animals Are Equal & Other Tales, led me to expect some fables featuring animals loving and tricking one another, perhaps for the sake of a moral lesson. I’ll save you from that misperception by saying Runkle’s collection is fairly animal free, minus the presence of a snow lizard and a Pomeranian named Violet. What Runkle’s fantastical worlds are filled with are people doing what they do best: wrestling their isolation.

Runkle himself is as much an artist as he is a writer; he has published comic books, zines, collages, art books, short stories, and is currently looking to publish a novel. In his website bio, Runkle explains that he likes tactile art that works with both images and text. The product of his taste for tactility and blending mediums is a diverse collection that frequently flirts with fabulism and occupies the fuzzy space between reality and fantasy. For instance, in the story “Romantic Comedy,” cupid sits high in the sky and “[a] gilt platter of butterfly shrimp floats by on a cloud. You pluck one and tear into it. The tail is vaguely heart-shaped, you think. You must remember this for your poetry.”

The images, in addition to the sentences, are crystalline, pretty, and border on bizarre. On the sentence level, readers will be driven forward by language that feels like one of Runkle’s texturized collages. Often, his images are transformative as shown in this quote from Runkle’s story about an altar boy: “They receive the body of Christ; they crack and dissolve it against the roofs of their mouths, careful to avoid the blasphemy of teeth. The wafers absorb and circulate and surround every head like a halo.”

Even though his language and imagery cut fresh paths, the movement between reality and fantasy does cost Runkle some points. Leading a reader into the surreal requires work; the author needs to ensure that the reader is oriented and has a solid patch of ground to stand on. Occasionally, I wished Runkle worked harder to orient me before diving into the pool of his characters and the stunning worlds in which they swim.

The impact? The flash pieces in the collection are more difficult to access. Authors teach their audiences how to read their work, and because his characters and worlds are so versatile I need that lesson in each of Runkle’s stories. The longer stories do satisfyingly lead the reader into the world, however, the flash pieces (which sit between the longer stories) move so quickly that not until I’m almost finished with the piece am I finally oriented.

Despite all of this, I’m grateful for Runkle’s fantastical moments because they make Runkle’s main theme salient: the characters are overwhelmingly isolated. This isolation is explored intimately in “Warmth,” one of the strongest stories in the collection. Here Runkle’s fantastical elements raise the stakes of the story and the introduction to the world is one of his cleanest. The world this story reveals is one where heat is a coveted resource. Runkle introduces us to the characters of the story by stating, “Now peer beyond the sheet-thin walls of ice and meet our heroes, Grinn and Bear. They sleep without blankets in the makeshift warmth of each other’s embrace, their sleep, though flurried, made safe by love.”

In this world, the Queen decides to build a pipeline (which “our heroes” will help build) for the purpose of channeling some of her palace’s warmth out so she can move across the country. We’re told “The pipeline would be heated and flooded with water, and could accommodate her gondola as she oozed from coast to coast, like slow maple syrup on its way out the tap, ferried in viscid comfort.”

In this story, two men work as one. Love here is selfless and soothing. At one moment, Grinn sees Bear “still sleeping, fuzzy as he was, begin to shiver. Edict still in hand, he crawled back to the mat and slept again, wearing his man like a cloak.” The unity of these two brings them comfort, love, and warmth. However, through the story a rift grows between these lovers. But Runkle’s unforgiving landscape and break from reality makes proximity to others a survival tool. This story hurts because the isolation is experienced despite that these two men physically give all they have, sleeping together at night, sharing body heat. Yet the rift between the men cannot be bridged and we see that to be isolated in this world is fatal.

Intimacy and proximity failing to alleviate loneliness is also developed in the story that shares its title with the collection, “The story of how all animals are created equal.” The piece opens with the line, “Though we shared a bed for six months, my relationship with Lena was always asexual. Aromantic too, I guess.” Here we see that even though the narrator is sharing a bed with his friend, he’s still enslaved to his isolation. The closeness of these two friends allows for more insights into the nature of loneliness later in the story.

When Lena started moaning in her sleep, I suddenly knew her noises had never been animal. As a child, I listened to coyotes in the distance, and imagined their howling was what being drunk sounded like. This is what Lena’s sleep-talk resembled now—animals sounding like people sounding like animals.

Coyotes howling strikes up the image of isolation embodied, which is happening in all of Runkle’s stories. Later on in this particular story, the characters debate the pop artist Prince, and whether he is animal or man, focusing on the song “When Doves Cry.” Here the animal of Runkle’s collection is furthered, and we see grief transform from a human experience to one of all animals. The impact of isolation continuously evolves in Runkle’s collection, culminating in a devastating yet satisfying final tale. Hang out with Runkle’s stories long enough to become oriented in them, and you lean in little by little until you’re absorbed.

Mike Jacoby is an MA candidate in Writing at Northern Michigan University.