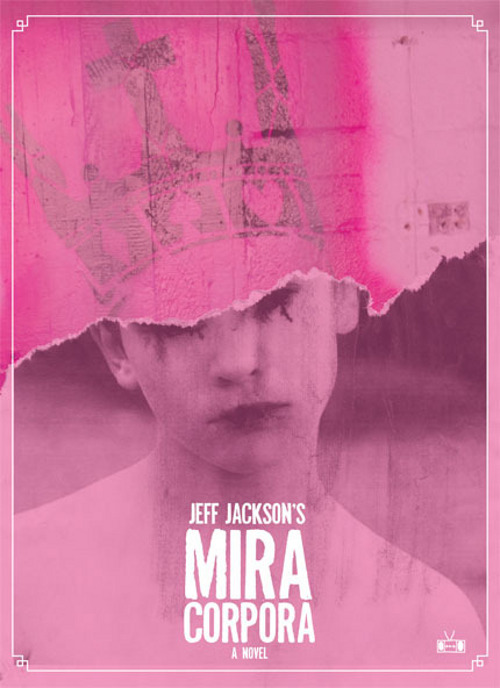 “These days I’m on a need-to-know basis with myself.” Two-thirds of the way into Jeff Jackson’s Mira Corpora, the novel’s narrator makes this brief, rare admission of self-awareness. It could also serve as a statement of purpose and description of a method.

Reading like the remains of a novel, the leftovers of a trauma narrative after all the clichés and rationalizations and special pleadings have been removed, the story is simple enough: a young boy trades his existence as the house pet of an abusive, alcoholic mother, for a comparably difficult hand-to-mouth existence surviving on his own and in the company of other outcasts and runways. The plot line sounds familiar, but Jackson’s handling of it subverts that familiarity and puts it to unique, unsettling purposes.

In what must be the most inventive use of authorial self-insertion in a novel since Michel Houellebecq’s The Map and the Territory (in which the author oversees his own murder and ritualistic dismemberment), Mira Corpora‘s narrator takes Jackson’s name and, in doing so, suggests the possibility of autobiographical confession. But from the novel’s opening passages, any promise of direct, reportorial description is undermined. What follows are a loose series of harrowing perceptions, the narrator stumbling from one experience to another, absorbing the full spectrum of cruelty and decency at the hands of a succession of strangers.

There is a search for a burnt-out singer (modeled, it seems, after Neutral Milk Hotel’s Jeff Mangum); there is a predatory captor who drugs and pimps the narrator out to the highest bidder; there is a hidden forest enclave of child runaways. Similar tropes can be found in other sources—the documentary Searching for Sugar Man, for example, or Lord of the Flies—but combined in episodic fashion in Jackson’s novel, and rendered in enigmatic, flowing prose and visceral, sometimes outright nasty imagery, these archetypes are smelted down and reformed into something wholly new and unrecognizable.

Instances of introspection and self-assessment are rare; events aren’t explained or contextualized so much as they are endured; after one hundred eighty quick pages of this, Jackson’s sensitivity and—despite the frequent surreality of his imagery—talent for realistic portraiture, become apparent. The novel’s originality owes much to the myopia of its approach, the narrator relating events as they occur, rendering his own disorientation and bewilderment in real time, in flat, declarative sentences whose narrative context only becomes clear after they have been tracked detail by detail:

I exit the park and madly scan the streets. My mind buzzes like a burning beehive. I’m looking for anyone smuggling a can of spray paint. I scrutinize the shifty-eyed punk sprawled in a doorway with his shoplifted cans of warm beer. The Hispanic man perched in front of the bodega, massaging the batteries of his busted cell phone. The drag queen who touches up her rouge while waiting for the express bus. Their blank expressions don’t give anything away. Maybe they’re not part of this game.

The cumulative effect of this kind of writing bears certain implications. Metacognition may be a luxury most often enjoyed by affluent narrators; whereas the consciousness of a character such as this is bound to be shaped by more immediate demands of survival. Hence an acute emphasis throughout the book on the narrator’s quick assessment of his immediate surroundings, the better to judge the intentions of the next person he encounters—friend or threat, harmless or dangerous?

This is a question the novel’s final chapter brings to the fore in a stark, surprising, if not entirely satisfying conclusion. But then again, the very reason Mira Corpora is such an engaging read is that it doesn’t aim to be satisfying.