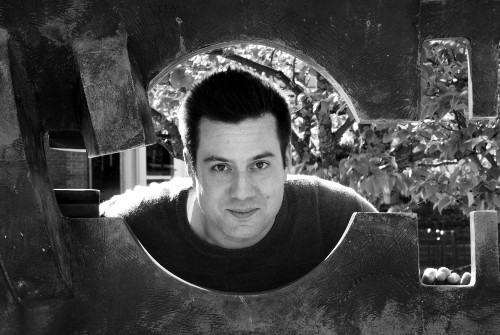 Welcome to “Contributors’ Corner,” where each week we open the floor to one of our contributors to the journal. This week, we hear from Dan Mancilla, whose story “Lucha Libre” appears in 3.2.

Dan Mancilla’s fiction has appeared in Barrelhouse, The Chicago Tribune, Monkeybicycle, Slice, and River Styx, among other journals. You can read more about Dan and his work at danmancilla.com.


Can you share a moment that has shaped you as a writer (or continues to)?

I’d always enjoyed writing but never considered it a realistic vocation until I read Stuart Dybek’s short story, “Hot Ice” in my first college fiction workshop. Reading that story was a lightning-strike moment for me. For the first time I was reading about people and places I knew. The characters in that story, Eddie Kapusta and Manny Santora, could have been guys hanging on the corner where I grew up. Dybek’s Pilsen neighborhood in Chicago was peppered with the same Spanish and Eastern European languages as my Elgin, Illinois neighborhood; the same blight—comfortingly familiar and crushingly oppressive—tinted both places; the same parish churches and smoky taverns provided refuge to the same weary residents. Besides the familiarity with the characters and the geography of “Hot Ice,” I thought I was drawn to the story for the decided “toughness” of those characters. In retrospect, very few of Dybek’s characters are Hemingway tough guys. They’re tortured souls, poets who wander the streets of neighborhoods as broken as their hearts. Dybek’s world is that of the poet and the magician, of Neruda and Marquez, Hafiz and Kafka. I overlooked that magic as a young writer. Now I see it’s that magic—the sublime and the mysterious set against the backdrop of a rusted-out, blighted landscape—which speaks to me and informs much of my work.

What are you reading?

Painted Cities, by Alexai Galaviz-Budziszewski. That’s another Dybek connection for me. After reading “Hot Ice” then quickly devouring all of Dybek’s work, I began corresponding with him. During that early correspondence I’d send Stu my stories, and he’d occasionally send me manuscripts of other young writers he was working with, writers who shared my interest in writing about place and who shared similar artistic sensibilities. Alexai’s work was among the manuscripts Stu mailed me during that period. I still have an early draft of a story which ended up in Painted Cities. It’s a great collection and a great reminder that patience is important when it comes to writing; I first read Alexai’s manuscript sixteen years ago. Painted Cities—the collection in which that work appears—was just published by McSweeney’s this spring. I try to apply that patience with my own work. Drafting and publishing “Lucha Libre” (which appears in HFR 3.2) has certainly been an exercise in patience. I wrote the first draft of that story more than a decade ago.

Can you tell us what prompted “Lucha Libre”?

The first draft of “Lucha Libre” was a chapter for a novel I was writing. The novel was about a luchador named El Gaucho. In the opening chapter (which is now a short story in my book-length manuscript, All the Proud Fathers) the three main characters of “Lucha Libre” go to a wrestling match and watch El Gaucho, their hero, lose then do the unthinkable and unmask himself. What became “Lucha Libre” was intended to be the chapter following that ill-fated wrestling match. I wanted to show the downward spiral for those boys, especially for Flaco, following their hero’s unmasking. As it morphed from a novel chapter into a short story, I became interested in examining three very different father-son relationships. Flaco’s dad is absent; he’s in prison but sends Flaco post cards of Paris and concocts a fantastic story about living across the street from the Eifel Tower. Then there’s Pig’s dad, Al Vargas. Al is present in Pig’s life, but that’s not necessarily a good thing considering how much physical violence he inflicts on Pig. Anthony and his dad represent the only fundamentally sound relationship of the three. But the idealized image Anthony has of his dad comes apart at the end when he sees his father drop the body of the dead girl from the bridge. Fathers have failed all three of these boys on some level.

Setting is always central to my work. Writing about the neighborhood around the wrecking yard allowed me to develop and explore more of Black Hawk, a place I like to describe as a fictional rustbelt city somewhere north of Gabriel Garcia Marquez’s Macondo, south of Garrison Keillor’s Lake Woebegone, and just west of Stuart Dybek’s Chicago. Wrecking yards are such image-rich environments. There was one near the neighborhood where I grew up. It was a magical place to me. I always knew I’d write about it at some point.

What’s next? What are you working on?

All the Proud Fathers, my short story collection, is under consideration with one of my favorite publishers, so that’s really exciting. I have work forthcoming in The Madison Review and Booth Journal. Those will be the final two stories from All the Proud Fathers to be published; whether or not I ever publish the complete manuscript, at least I can say that I’ve published every story of the collection in some fine journals. As far as new work goes, I’m gearing up for a novel which is set in 1930s Black Hawk. I also finished my Ph.D. in English, Creative Writing at Western Michigan University in April.

Take the floor. Be political. Be fanatical. Be anything. What do you want to share?

While I don’t often hear writers arguing about highbrow versus lowbrow the way Gore Vidal and Norman Mailer may have on some smoke-filled talk show set forty years ago, there are still palpable ripples in that critical pond. Nicholas Sparks, Suzanne Collins, Gorge R.R. Martin. Those names will conjure notions of “low brow” prose for some. Say what you will about the technical ability of those authors, they know how to keep their readers turning the page. Ultimately, isn’t that at the core of what we do?

On the other hand, an unspoken highbrow ideal occasionally pops up in creative writing programs around the country. This is where I encounter writers with little regard for their audience or acknowledge no audience at all. These are the narcissistic, naval-gazing, ennui-wracked authors forever concerned with the solipsistic “I” (whether or not working in first person). Beyond a lack of consideration for audience, this class of writers walls their fiction off from readers by steeping it in the murky world of metanarrative or drenching it in sneering irony. When called out in a workshop or review, these writers often hide behind the term experimental as if that excuses a lack of story or character development. I’ll own up to dabbling in this when I was a younger writer. I’d pull off tricks on the page simply because I could, not necessarily for the benefit of the story. Today, with my dying breath, I’ll argue that boundary-pushing fiction can and must tell a good story.

At this point in my career I don’t believe it’s my place as an artist to write stories that draw attention to themselves as works of art. The artifice in my fiction, if there is any, is the complete and absolute dissolution of artifice. I work diligently to make sure there’s no hint of the puppeteer’s stings. The task I set for myself as an artist is to produce an immersive world—both familiar and fantastic—while always remembering to give a damn about my characters and to write characters who give a damn about something.

And now for the political part of the essay:

Hulk Hogan was, is, and always will be better than Ric Flair.