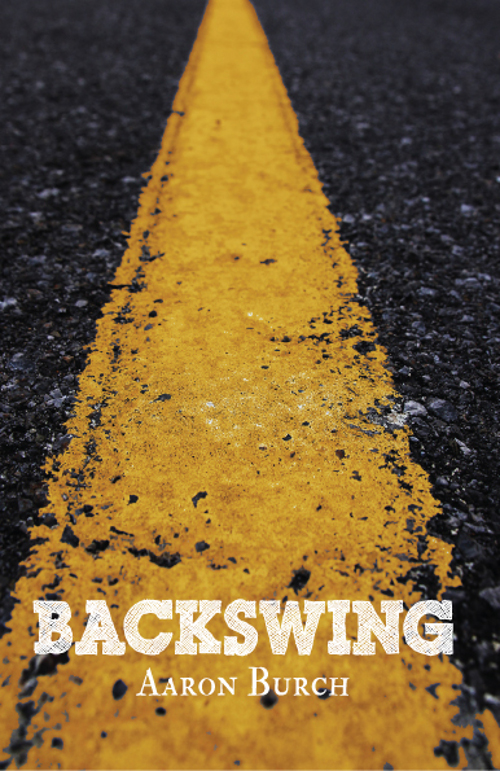 There’s this great video on YouTube of the late Kurt Vonnegut giving a lecture on story shapes. Standing before a chalkboard in a dusty brown blazer, the author graphs out some of the more common narrative arcs, the idea being that the more familiar one is with the shape of stories, the easier it is to find crafty ways of subverting these conventions.

This, I think, is a concept that Aaron Burch, author of Backswing is quite familiar with. While the stories in this collection address such themes as the turbulence of the teen years and the often traumatic entry into adulthood, Burch isn’t as interested in the conventional narrative as he is in the idea of narrative. What he really wants to illustrate to us is its malleability. He wants to see how much he can get away with. In some instances he’s able to pull off quite a lot, while in others this approach doesn’t pan out so well. However, in any case the attempts are bold and worth exploring.

Most of these stories are related to us through a distinctly male point of view; more specifically, our main characters are often young men longing for a better understanding of themselves and the world around them. Burch uses the volatility of this period of life to test the boundaries of standard storytelling. In some cases, the effect is a kind of postmodern experiment in which what is left unsaid—the “less” in that old “less is more” adage—takes the forefront of the story, as in “Prestidigitation,” in which a performance artist gives a demonstration of a rather gruesome new trick to her lover:

Linda takes the razor, pricks her finger. She holds it out toward Roy, the blossoming drop of blood proving the blade. She puts the tip of the blade to the center of her wrist, pushes in. The skin holds for a second, bends, then, like a shot, like taking a syringe, gives. With an ease showing either the sharpness of the blade or the skin’s readiness, Linda pulls in a slight curve, an arc from wrist to fold of elbow tracing her vein… Roy’s first thought is my girlfriend is killing herself, even while knowing this is the trick. An illusion.

These are cool premises, to be sure, daring and unique, except that Burch seems reluctant to do much with them. In fact, in many cases a cool premise is all we get; rarely does the reader get a sense that a character has experienced any sort of internal change by the end of the story. I have no doubt that the absence of shape in much of Burch’s writing is intentional, but I’m still left wondering: Why?

Clearly, the author is attempting to subvert our traditional understanding of story structure, and in some stories like the cryptically dystopian “The Stain,” this approach works well. But in others like “Fire in the Sky,” it leaves the reader feeling unsatisfied, deprived of any sense of movement or, perhaps more aptly, resolution:

We weren’t running toward anything, except a destination chosen at random because we could see it from a distance, and we weren’t running away from anything, except whatever was behind us and wherever we were a minute ago, but it felt like I’d never felt so motivated … My legs started burning and my side ached and my feet and legs hurt but I didn’t once think of stopping, knew I wouldn’t until I got there.

This passage seems to embody much of Burch’s writing: we get motion and movement, but not much direction. And I don’t mean this to come across as some cantankerous tirade about how a narrative simply must finish cleanly, must offer some sense of closure. It’s just that the question of what we are to take away from the story becomes difficult to answer. I suspect that this might be because the author himself isn’t sure.

And I’m not necessarily arguing that he should. Not always, anyway. That’s part of the joy of creative writing, the variety of reactions it engenders in your readers. But in the case of, say, “Sacrifice,” in which an unnamed character mutilates himself following the unexpected death of his brother, I get the sense that Burch might be playing his cards a little too close to the vest: I agree with the “less is more” adage, I encourage my own students to think this way, but we still need something to hold onto, something to carry away from the story. But a number of stories in Backswing seem reluctant to offer that.

The ones that do, though, I mean the ones that the author very clearly had a blast piecing together, these are what make the collection worthwhile. “Flesh & Blood” might be the best example, in which a student at a new high school attempts to reinvent himself as a skateboarder in an effort to attract more friends. Here, Burch writes with the authority and control of an author who simply wants to have a good time writing and trusts in the story’s own sense of direction:

“You looking for a board?” the guy behind the counter calls, and as soon as Ben can answer, the guy follows up, “Your first?”

Ben is shaking his head, shrugging his shoulders, trying to act cool, but his dad answers for him. “It is!” He punches his son in his shoulder and dives into telling the guy about how they made their own skateboards in their day. Just planks of wood and wheels from roller skates, and, oh god, Ben wants to get out of there as soon as possible. What is his dad doing? The guy recommends a size of board—there are different sizes?—and wheels—different size wheels, too?—and Ben looks through them, keeps deciding then changing his mind. He likes the one with the girl in a bikini, but doesn’t think his parents would let him get it, and another with a lizard that looks cool but…is it?

In fact, Burch is a lot like the main character of this piece: he is constantly trying new moves, knowing that they won’t all pan out. But it’s the trying that matters, the forays into something new and unconventional. Because here’s the thing: the moves he is able to pull off are truly spectacular. Backswing has its flaws, sure, but it’s still a damn good read, brilliant in places, the work of a writer who thrives on taking risks.

Jeremy Griffin is the author of a collection of short fiction titled A Last Resort for Desperate People, from Stephen F. Austin University Press (2012). His work has appeared in such journals as the Greensboro Review and Mid-American Review.