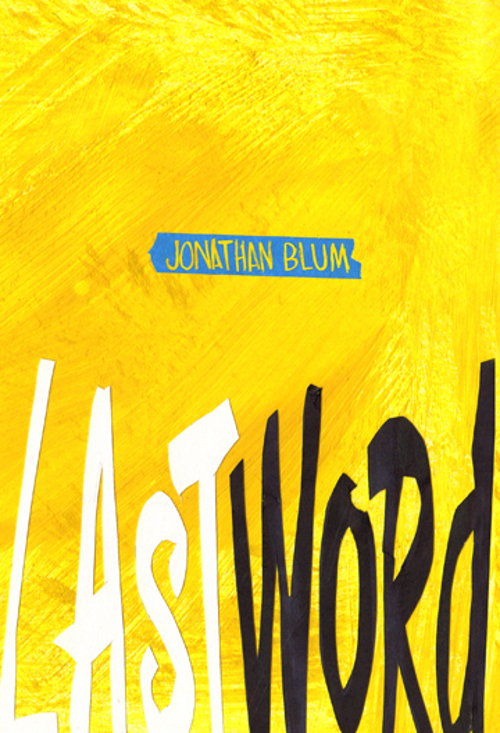 Set against the backdrop of changing technologies, cyber-bullying, and blended families, Jonathan Blum’s novella Last Word tells of Kip Langer and his son, Eric, as Kip attempts to understand a boy connected to him by blood and little else.

Facing both a civil liberty negligence suit and his thirteen-year-old son’s expulsion from his Jewish middle school, Kip relays the story with little understanding, saying defensively at the outset “I shouldn’t have to learn computers to have a relationship with my thirteen-year-old son.”  Instead he tries to get Eric interested in swimming as a way to build character and lose some weight. Quickly Blum encapsulates many of the issues that plague Kip as a father: his unwillingness to respect his son’s interests, his desire to bend Eric to the things he likes, and his criticism of who the boy really is.

But despite his cluelessness, or because of it, Kip is an endearing character, increasingly befuddled by his family and the actions of others, and generally out of touch with the world around him.While he could too easily come across as rigid and selfish, in Blum’s hands, he’s quite the opposite. Kip wants to understand other people and make connections, but is at an utter loss about how to do so. Describing one of the city neighborhoods, he says,

I ordinarily have no reason to visit Centerbridge, which I guess you’d characterize as a bohemian area—a lot of artists, single adult people, men walking their strange dog breed types, young childless couples, kids out of college, interracial groupings, and so forth. A high uninsured area. I get very few referrals from Centerbridge. It used to be one of the older money areas of town. There’s a big park where they stage pop music concerts during the summer. In the front windows of some of the divided Reconstruction-era houses across from the park, residents hang flags whose symbolism is lost on me. I would not consider Centerbridge inviting to outsiders, but people seem to like it.

Such layered observation is one of Blum’s strengths. As the reader learns about Centerbridge, the distinctive sensibilities of Kip Langer are at work: his perplexity over other people and their interests, his ranking of a neighborhood according to the number of referrals it brings to his medical practice, and finally, his begrudging acceptance that what confuses him attracts others.

Complicating his understanding of the world and how it works is Kip’s faith. An observant Jew, he doesn’t understand how he ended up with a son on the “100 Online Haters Beware List” for anti-semitic behavior. His religion is just another system that’s failing him as he attempts to connect with Eric. “In the Talmud it says that a father is supposed to teach his son to swim,” he says; “Eric knew how to kick, move his arms, and advance in water but not how to swim, and this bothered me, not only because of how well both my daughters swim, and how comfortable they are in the water, but because having a non-swimming son can make you feel like a personal failure.” In many ways, the reader sympathizes with Kip as much as with Eric. What do you do with a son who doesn’t want to learn what you have to teach him, and doesn’t see the value in the lesson? Swimming too becomes an apt metaphor for his relationship with Eric, as he behaves how he thinks a father should—teasing his son, leaving chunks of the parenting to his wife, providing a well-to-do life and a quality education. He’s moving his arms and legs, so why doesn’t this look like swimming?

As the novella progresses and Kip must confront just what Eric is capable of in the electronic world, and what bullies he faces in the real one, Kip begins, slowly, to gain an understanding of the real issues, or at least an acceptance of how little he understands. As much as it’s a story of Kip and his son together, Last Word is also a story of acceptance and of seeing the flaws in oneself. Toward the end, Kip says, “Even now I don’t blame myself for saying yes. Perhaps only fathers who have had trouble raising their sons will understand when I say I thought I was helping him build more bridges.” Perhaps not succeeding, but trying all the same.

Erin Flanagan is the author of two short story collections published by the University of Nebraska Press: The Usual Mistakes (2005) and It’s Not Going to Kill You, and Other Stories (2013). Her fiction has appeared in Prairie Schooner, Colorado Review, The Missouri Review, The Connecticut Review, the Best New American Voices anthology series, and elsewhere. She’s held fellowships to Yaddo, The MacDowell Colony, the Sewanee and Bread Loaf Writers’ conferences, and this summer will serve as faculty at the Antioch Writers’ Workshop.