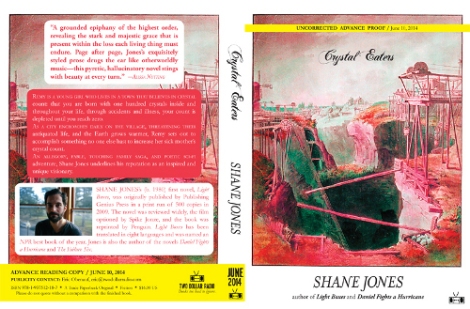 A few personal notes before I dive full-tilt into this review of Shane Jones’ new novel, Crystal Eaters, that will, hopefully, over the course of the review, become apparently non-self-serving and more edifying about the nature of this book:

1. The day I started reading Crystal Eaters, my cat was in the hospital with kidney failure. I’d taken her to the vet thinking she had been stricken merely with a cold, but the vet kept her over night and, after performing blood and urine tests, reported that her BUN and creatinine numbers were much higher than usual, and unless they experienced a significant drop over the course of three days, I would have to put her down. Three days later, the numbers had barely dropped, so I was forced to make that difficult decision.

2. A year ago, I began experiencing chest pains, heart palpitations, hyperventilation, and several other symptoms that indicated high levels of anxiety. However, being a self-diagnosed hypochondriac, I’ve been going to the doctor, having perfunctory lung and heart tests performed on me, and thus far nothing physical seems to be wrong with me, as I should have guessed. (Hello, hospital bills I can barely afford. Hello, subsequent self-loathing and -doubt.) I turn twenty-eight in several weeks, have yet to come to terms with my own mortality, and struggle on-and-off with quitting cigarettes. Sometimes all I can think about is my impending death and how little I have accomplished, whatever that means. This anxiety of course distracts me from “the moment” on a regular basis and at times dominates my thoughts to the point where I may as well be walking alone through a dark tunnel and not outside with people, I’m so completely disengaged from life.

3. Recently I came into possession of a healing crystal. It’s a tiny one and I carry it around in my pocket, more out of sentimental value than anything else. Do I believe that crystals have actual healing properties? I don’t know. But I do believe that people can believe in the healing powers of crystals, the same way some people believe in God to the point that their beliefs determine their actual physical and psychic makeup and outputs on the mot daily, mundane level, e.g. how they feel and behave when buying groceries or talking to their neighbors or children. Faith in anything is powerful because faith affects our minds and our minds affect our bodies (see #2).

Crystal Eaters is a fantastical reckoning of loss, and the anxiety leading up to loss and our predestined expirations, and the actions we take under the influence of these anxieties. The story is set in a village whose inhabitants believe that every human being is born with One Hundred crystals inside of them, and when a person’s crystal count reaches Zero, they die. Crystal count diminishes over time, but this diminishment can be accelerated by disease or violence, e.g. getting hit by a truck drastically reduces one’s crystal count. Meanwhile, a city that seems to be mysteriously propagating itself and whose citizens feel a mixture of contempt and fascination towards the villagers’ old-world, crystal-based customs looms ever closer on the village’s horizon. The sun also threatens to fry everything as it grows larger and hotter in the sky.

The novel follows one family’s struggle with their mother’s rapidly dwindling crystal count, as well as several characters directly related to the family. Remy, the youngest child, believes she can save her mother by raising her crystal count by finding and feeding her the legendary black crystal, a feat no villager has ever reportedly accomplished. Her father, meanwhile, fatalistically accepts the fact of nature, that everyone’s crystal count eventually reaches Zero, to Remy’s disgust. Remy’s older brother, a.k.a. Adam, a.k.a. Pants McDonovan, a.k.a. the founding member of The Sky Father Gang and the only person to have secretly found black crystal, rots away in the city’s new prison, unable to help his mother with whom he has a traumatic connection.

Crystal Eaters’ plot, while still fairly minimal, takes on more surprises and challenges than Jones’ previous novels. Still, the heart of the novel remains the same, supplanting traditional plot for its characters’ exaggerated emotional outpourings that somehow reveal more than they distort. This is Jones’ main gift as a writer, I think: he’s able to form, out of imagery, metaphor, and sentence structure that sometimes comes off as overly precious and at other times feels refreshingly precise and clear-sighted, narratives that honestly mine and expose the doubts, the fears, and the defeatisms we all share.

Every character in Crystal Eaters is in some way motivated by their mortalities. Remy strives to fight her mother’s illness, believing you can fight destiny, while keeping close, obsessive notes on her own diminishing crystal count. Dad believes that he has accepted his wife’s impending Zero, but has shut off emotionally to such a drastic degree that he can barely feel anything. Another character, Z., leader of the Brothers Feast, believes that he can defeat his inevitable Zero by achieving the immortal act of breaking Adam out of the city’s prison. And Adam ingests black crystal less for its healing powers and more for its sometimes distracting, sometimes illuminating hallucinations.

Throughout the novel, Jones presents the various actions his characters take to stave off Zero with a deft ambiguity. Possibly the most fraught example of this battle against death is how Remy’s anxiety about her own Zero determines her desire to save her mother. Her motivations aren’t entirely selfless, but reflect her own fear and superstition. Remy perceives her own desires as hope and charity, while she views Dad’s submissiveness as weak. Dad (rightly) understands that Remy’s desire to save her mother is foolhardy at worst, doomed at best, but his own resulting emotional blankness has the opposite effect of “dealing with” his wife’s death and cuts him off from not only his own emotions, but those of his dying wife, his imprisoned son, and especially Remy. The question, then, is what is gained in fighting the inevitable, and what is lost? Is there any good way to fight it? Why do we try to fight it at all?

The encroaching city provides a more large-scale view of this question. The proliferation of the buildings, which seem to be sprouting of their own volition and has even city officials scratching their heads, and the city’s increasing proximity threatens the village’s quaint ways and stasis of beliefs with amenities that most of us take for granted, e.g. television, coffee shops, cars, etc. This is progress, and the inevitability of historical change and history itself, bearing down on the village. At the same time, tourists from the city buy crystals from village dealers as trinkets and curiosities, the same way that we hang dreamcatchers above our beds or dangle them from our rearview mirrors, a means of holding onto something “magical” from a culture that we destroyed, at once a dilution and a celebration, without realizing that the progression of history and the arrival of the future, completely out of our hands and our control, is no less mysterious, the nature of time no less magical just because we have iPhones and Netflix now.

And then, there’s the sun, which throughout the novel threatens to swallow everything, just as our own sun, eventually, will swallow everything. Nothing will be left, not Crystal Eaters, not Shane Jones, not this review of the novel, not even my cat’s ashes. In the face of impending doom surrounding us at all times, what’s the point to doing anything? Is every action we take, as a prison guard named Jug asserts in the novel, just a “trick” to distract us while we wait for the end? You could say that, I suppose, but Crystal Eaters presents a beautiful argument for the alternative, that being alive bears its own reasons.

Michael Goroff lives in Columbus, Ohio. He is a graduate of the Northeast Ohio MFA program.