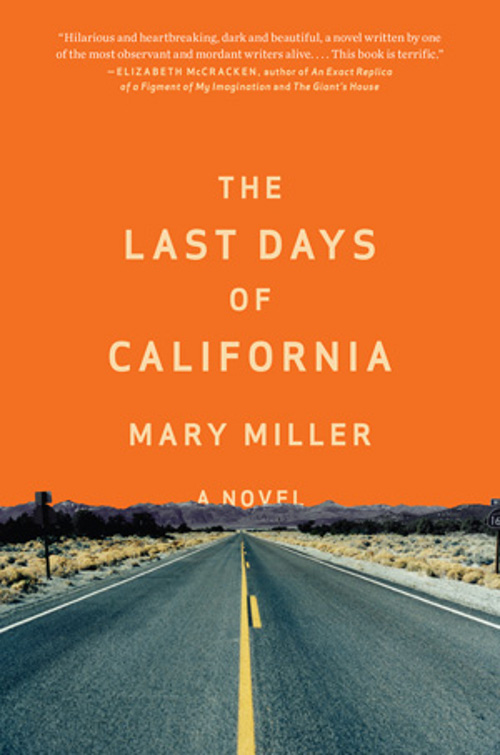 There’s a theory in neuroscience that brains “couple” when undergoing successful communication. The speaker’s brain will utilize its portions that are necessary for speech production while the listener, with a slight delay, uses the portions that are necessary for speech comprehension. If the brains aren’t “coupled,” there is little retained knowledge in the listener, even immediately after. What makes this interesting, though, is that sometimes the listener’s brain activity precedes the speaker’s. This activity is in the portions of the listener’s brain that are involved with predictions. Predictions that, if correct in the assumption of where the speaker is going with his or her story, lead to a deeper and more lasting understanding in the listener.

Predictions play an important role in Mary Miller’s novel The Last Days of California. There is the Christian fundamentalist prediction of the world coming to an end—of which the narrator’s father believes will happen in a few short days at the beginning of the novel—and there is the inevitable prediction that follows for those of us who think of ourselves as “practical”: the world, alas, will continue existing as a habitable environment. This leaves us with a novel that we know will end not with a bang—but will it whimper, or will it ring out in some unforeseen note?

“Successful communication” is something I’ve been thinking about lately, mostly in terms of how often times communication turns out to be unsuccessful and how it’s successful when I think it isn’t. For instance, I’ll be watching TV and my mind will glaze over. I’ll be in a grocery store, hearing some nineties pop song unconsciously, and then hum it later to myself and wonder how it ever got in my mind, let alone what brought it to my lips. I questioned, settling in with Miller’s novel, how successful the communication would be. The family Miller focuses on is traveling to California to view the Rapture in Pacific Time, and I was familiar with the road trip novel as most of us are, but not so much with fundamentalists, and definitely not so much with teenage girls. I was hopeful, an eager fan after reading Miller’s first book Big World, but I also felt a bit of dread. What if I’m bored by the drone of a road trip? What if I can’t connect with or, worse, don’t care about these girls’ problems? What if I glaze over as I’m turning pages, and when it ends, it whimpers, and nothing sticks with me, haunts me, brings me back to its story?

The Last Days of California, though, did not deserve the worries I had going in. Miller’s prose is as sharp as ever, and her characters resonate in emotional terms that go beyond the external triggers such as similarities in age, gender, or belief systems that work quickly to spawn feelings of closeness to someone. The complexity of the narrator Jess’s worldviews on many accounts—sexuality, beauty, religion, how people can even stand their simple existences—show someone who wants to become more active, who wants to step out from the shadow of her “knockout” older sister Elise and figure things out for herself. When Jess notes that her father doesn’t like a preacher her mother is listening to because she is “loud and opinionated, and worst of all, unattractive,” we are aware of the bitterness Jess has of not being born as beautiful as her sister. Later, though, Miller balances this out. Jess says to Elise:

This exchange shows how Jess’s view of beauty becomes subjective, more truthful (through successful communication!). Yet, even though the foursome in the car shares some customs—they wear King Jesus Returns! T-shirts and hand out tracts warning others of The End—individuality blossoms. At times we wonder if they understand each other at all and at other times we wonder if anyone would be capable of understanding someone else so well. So while Jess has been jealous of Elise, other times she’s anything but. Jess thinks, “She [Elise] could have been on TV she was so pretty. She was so pretty she had gone and gotten herself pregnant.” Jess’s ambivalence rings true in a world where there are so many ways to understand yet disagree, so many ways to convince one’s self of understanding when there’s no comprehension, and so many ways to misunderstand entirely.

Throughout the novel, we see Jess changing through both her rich and ever-questioning interiority as well as events that she won’t soon forget. These events will become part of her worldview as well as her repertoire of stories she might tell someday to explain, This is why I’m me, or, more likely for her character, This is maybe part of a bit of why I’m me, which is a concept that is always in flux. She gets nervous telling a story for a second time because she feels the story has taken a life of its own and her ownership over it is diminishing. Her character isn’t indebted to what I’ll call the “standard response” story. For example, there’s road kill on the side of the road, which Jess mentions. This leads her mother to tell “the story of the time she ran over a turtle. I [Jess]’d heard this story a dozen times.” Jess can easily predict that she’ll hear the story again when she mentions the road kill because of the redundancy in the mother’s response, much like a viewer watching the same car commercial that’s been on three times during halftime, which is filtered out as noise. The hook goes unheard. There isn’t that direct engagement—that feverish push that we see in Jess—to find out not only everything about what is directly around her, but also about all the sorts of lives encountered traveling across the country.

This book, as well, is not the old folk standard of road trip tales, nor would I classify it only as a bildungsroman. It is a brave book with extraordinary prose and vulnerable characters that grow beyond their immediate experiences and become—like Waffle House and the many fast food restaurants—almost universal. Though, in the case of Jess and the rest of the Metcalf family, it’s not for the familiarity of the menu items, but for their search for meaning across the American landscape.