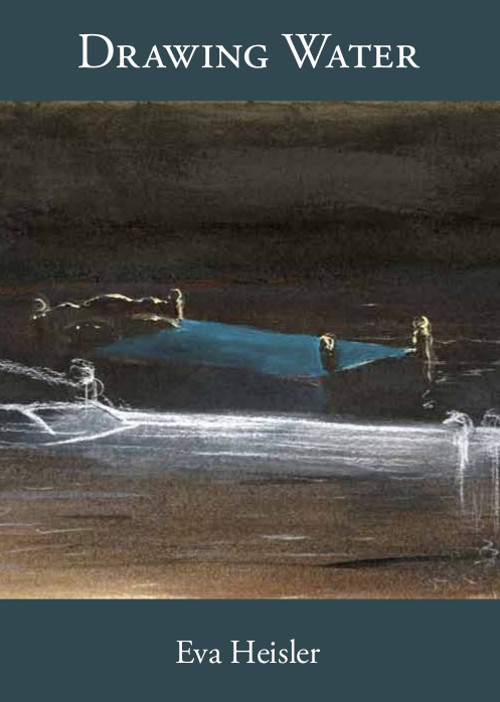 Perhaps one of the most difficult processes to demonstrate, investigate, interrogate, mimic, and exemplify in poetry is that of the creation of a poem itself, and yet, in Drawing Water, that is precisely what writer Eva Heisler sets out to do. But, this isn’t the typical meta-writing that many readers may be familiar with and even exhausted by (for who really wants to read about how difficult it is to write?). Instead, Heisler focuses on examining the drawing process—the creation of a form on a white page, which seems more akin to writing and mimics a type of Icelandic mimeography—pairing the process of art with that of writing with larger, broader, more existential questions that absorb and engage.

Heisler starts with, “Take the horizon line, for example, / a mirage— / that marks the limit of sight”. It is this line, as a beginning, that will help orient a reader into the task of this collection—a quest of definition and conquest of that line.

I spend much of my writing time seeking
that horizon line. I know that there is no such line but I see the line
when I look up from small blocks of text and squint at
the sea. To write prose poems is to resist the horizon line—

I work with little ink in my pen and hardly make a
mark.

Here, the narrator begins with the investigation of a focal point—a purpose—and how impossible that may be when writing a poem or drawing something as seemingly simple as a box, which Heisler later repeats and further examines. The horizon line—the “fine line” between a poem and prose is what becomes a slippery monster for a writer—the demand of definition limiting a process, which is shown at the end of the lines, where the narrator explains that the pen will “hardly make a mark”.

But, the emptiness of space is not the ultimate fear in this collection. Heisler later writes at the bottom of a long, blank page, “The page is a body of a ghost (but I don’t believe in ghost[s])”. Here, is the indication that perhaps something has once existed (a poem, a drawing, the body of a living being, etc.) and that the writer is somehow tuning in, absorbing some vital inspiration, and echoing, perhaps, what has existed before. But, Heisler, again, resists something as easy and contrite as all of that. Because the narrator “does not believe” in ghosts, there is the pressure of having to actively create—to work—to not wait for the page to fill itself. Here, is where a reader begins to see how difficult it is to draw something as fluid as water.

One way to navigate the white space is to use color, to draw boxes, to lay down words. The narrator laments that,

but when white is well managed, it ought to be strange—tender as well as bright—like white roses washed in milk. The eye ought to seek the white for rest, brilliant though it may be; and to feel it as heathen
space
among a flushing of reds.

Heisler shows the problem of white is that it is seen as a “heathen / space”—a demonic threat, a silence, a damnation. The artistic impulse, that she examines so carefully, is the need to fill a space with color or line, an experience that is akin to writing. Both processes seem to be emergent from absence.

Of that absence, Heisler writes, “The line break is hesitation or resistance or acquiescence / or a tiny rip in the mesh of a screen door. / Lines may multiply as cracks across the surface of an old painting / or lines may measure and slice like a butcher’s cleaver”. Here, the white is absorbed between the lines as the poem emerges—adapting itself around space and breaking through it, leaving tiny breaks or rips “in the mesh of the screen door”—a space where anything can invade.

Drawing Water takes a reader on a journey inside the mind of a creator. It is a book that takes time, needing to be savored upon each read. Yet, with each read, the desire for more remains. The prose takes on a minimalist style that Heisler uses in an adept way that challenges the way we think of prose and poetry—inviting a reader to enjoy the simple sound or look of a word on a wide, blank page.

Kate Kimball  received an MFA from Virginia Tech in 2010.  Her work has appeared in Kestrel, Weber, Ellipsis, Hawaii Review, and Midwest Literary Magazine, among others.