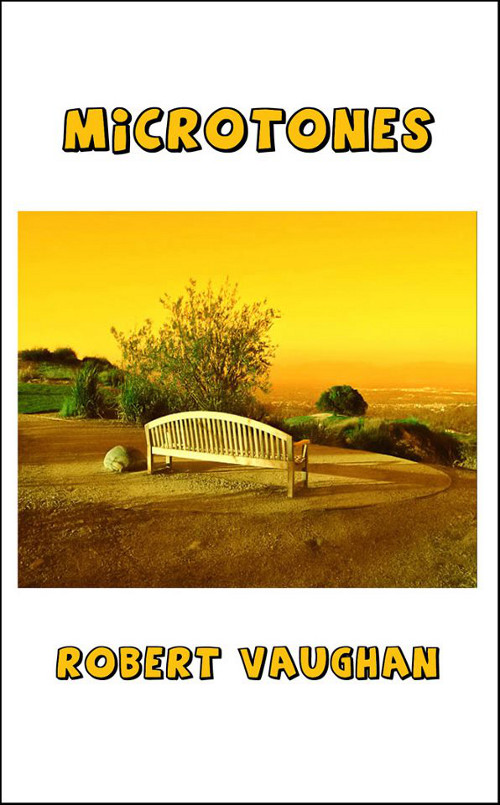 In a recent essay in Boston Review titled “Against Conceptualism: Defending the Poetry of Affect,” Calvin Bedient writes that “Vehemence of feeling nonplusses the modern personality, a hostage to ambiguity and irony.” He says, “More and more poets are suspicious of lyrical expression and devote themselves to emotionally neutral methods.” While Robert Vaughan’s Microtones can hardly be identified as a conceptual text, the work within certainly adheres to the trends in contemporary poetry that Bedient describes.

Vaughan’s writing falls more comfortably into the category of flash fiction than poetry, although much of it shirks both genres. Yet even as he eschews the music of poetry, Vaughan shades out narrative meaning, as in a piece called “My Bicycle,” which, as he writes on his blog, “hints at a first time experience”:

The camper’s tent in searing sun,
his beard, his beer breath, deck of cards,
his lead foot brushed, no, rubbed my leg,
the zipper of the open tent shut

This is the story of the poet losing his virginity, though, as Vaughan says, “Surely, as does most poetry, it leaves more details out than what might be included.” But at what point does complying with prevailing mores of literary poetry undermine the efforts of the reader to feel something from or understand the work? For instance, the two stanzas preceding the one above both deal with a “missing father”—a father figure we’ll see elsewhere in Microtones but never in clearer relief—rather than the myriad psychological events leading the narrator into the tent:

Riding my bike down Farmington Road
past severed hay fields, precision bales,
swollen stream from summer storms,
I do not know my missing father.

No, not dead yet
not alive, I can not tell
you where he went. I didn’t
know pain could cut this deep.

It’s difficult to evaluate the tent stanza in the context of Farmington Road and the missing father and the stream—waypoints that direct the reader away from the tension at hand, as though the narrator’s missing father and the loss of his virginity hold the same emotional relevance for him as a landscape noticed from a bicycle. What is he trying to say about this pain?

Then there is the poem “Semaphores”, in which Vaughan risks music and it pays off. Neatly packaged rhymes in three-line stanzas edge close to pentameter, with a haiku sensibility:

I come from steel, bolt,
twine, bales of indifference,
swells of turpentine.

Usually, though, Vaughan’s work relies more heavily on characters than on sound or imagery (even “Semaphores” has an I who must be there to tell you something). Thematically, a discontent having to do with parents, left simmering over a long time, becomes the chapbook’s prevailing flavor. It culminates in the final poem, “Wrestling with Genetics,” in which the speaker wrestles the car keys out of his drunk father’s hands after spending a long evening with him at a bar. The title is ironic because it implies a wrestling with the narrator’s own demons that he sees in his father, but the piece admits no such complicity or complexity, instead leaving unanswered questions: What were you doing at the bar so long with your father? What did you guys talk about? If he’s crazy drunk and you’ve been drinking the whole time, too, then how drunk are you? Or if you are much less drunk than him, then what were you doing while he was drinking?

Generally the point of view doesn’t stray from the “blameless (flawed but lovable) characters” that critic Anis Shivani decries as being the only kind of characters that contemporary literary fiction permits. Mom and Dad, quit your shit, these pieces seem to want to say, while at the same time remembering that it’s probably not going to happen and suggesting, if not moving on, then at least moving.

And motion occupies a central place in Microtones. Deliberate verbs of movement, like “his lead foot brushed, no, rubbed my leg”, substitute for expressions of emotion. In such short pieces it’s a perplexing move, because these verbs pack little meaning. This mode of writing climaxes early in the chapbook with the piece “Stand Here”, in which the verbs come, in a conspicuously conceptual way, into the foreground:

She stood on the corner of Halstead, then Houston. He stood on
his head with the rain pouring up. She stood, kneeled, lay, then
stood again. None the worse for weather.

When there is nowhere to go, false gestures of goodwill foster perpetual isolation. Again, Shivani: “The conventions of literary fiction are that the bourgeois hero (more likely the heroine) be vulnerable, prone to shame and guilt, unable to fit the pieces of the larger puzzle together …” In “Buried,” two young women console each other over the man they both met in boot camp who has gone missing in action. Incidentally, both women have borne his babies out of wedlock, and that is the reason they “were lucky” to get jobs at Walmart. The tension results from the narrator knowing something the other woman doesn’t know:

She still doesn’t know it was the same guy.
Trent.
She lights another Marlboro.
I grab it from her. Extinguish it.
“It’s all I have,” she pleads.
“Debbie don’t,” I say. “Think of your kid.”

Such quiet and banal reprimands, Microtones implies, never quite work. Yet here it is: Mom (and Dad), Think of your kid.

Jeremy Hauck’s work appears in The Molotov Cocktail, Penduline Press, TINGE Magazine, and on the Ploughshares blog, among others. When he is not changing his and his wife’s newborn baby’s diaper in Lancaster, Pennsylvania, he teaches essay writing at Temple University and dabs at a novel-slash-memoir about his Appalachian Trail thru-hike. On Twitter: @DickHumbird.