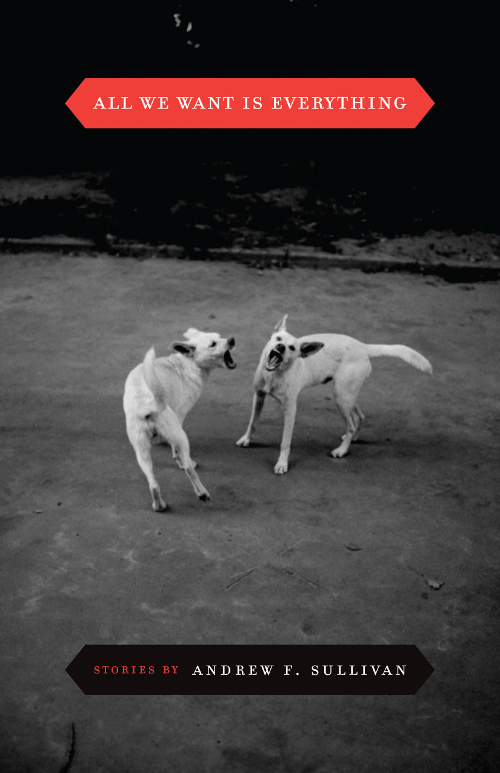 Andrew F. Sullivan’s debut collection, All We Want Is Everything, revolves around characters who started off badly and have been trapped in a steep decline ever since. The cast predominantly features characters who are down on their luck, struggling working class, or both. These are characters who experience powerlessness. They enact violence, and violence is enacted upon them.

Most of the stories are grounded in a dark past that informs a grim present. Many of the pieces focus on a character’s history that is richly detailed, sometimes more so than the continuous present that sparks the memory. The dynamic is similar to Stuart Dybek’s iconic story “Pet Milk,” except the memory is prompted by a blood-spattered floor instead of the swirl of pet milk in coffee. Sullivan’s stories, rather than remaining in the past, always wander back to the disturbing present. “Good King,” “God is a Place,” “Thaw,” and “SATIN LIVES!” in particular stand out for their intensely retrospective narrators.

Sullivan’s characters are observant and thoughtful. They feel the events, people, and circumstances around them deeply, making pithy, grim observations such as “Even now, the crows can eat well” when one narrator considers his father’s rotting corn field. These statements are, perhaps, too close to each other in tone and point of view in the collection as a whole. The narrators start to feel too similar in their ways of observing and describing the world. This effect is a possible danger of reading short story collections straight through, but this overlap is emphasized by the collection’s strength of unfolding worlds from different perspectives and classes. The variation in character could be used to even better effect with a greater range of voice.

In other ways, however, the sharing between stories draws them together. Most of the main characters are submerged in helplessness. They have no control over their fates, and the movement of many of the stories is to bring the main character to a place where he or she can take action, any action, to rebel against the relentless forces around them. Anita in “Pumpkinheads” is swept up in a current of events following her husband’s death, and she is an unprotesting piece of driftwood that actions happen to and decisions are made for until she finally acts. Harriet of “Self-Cleaning Oven” is caught in the turbulent swirl of the relationships between her sisters, her boyfriend, his ex-wife, and his young son until she forces change with an unforgivable act.

This new act is, for many of the characters, a dark one. Cruel or violent. Desperate. These are characters who must do something, anything, to stop the long slow drift to an inevitable end or a suffocating sameness. For characters so engrossed in thinking, remembering, and being acted upon by those around them, the actions are important movements and changes for the main characters. Read as a collection, the pattern becomes a little too obvious, but individually, the stories are engrossing, even shocking. However, the stories need more space from each other than a collection affords to have the same strong impact they would have individually. This collection is best read slowly, giving the stories room to expand.

The most memorable and arresting story in the collection comes toward the end. “Mutations” is a story about a man who works security at a nuclear facility where employees have begun to father babies with strange mutations: tails and extra belly buttons and the like. His wife, fearing the repercussions the nuclear plant could have on their own fruitless attempts to have children, joins the general flight from the city, but the narrator refuses to go with her. The story is peppered with these mysterious, mutated images, particularly the news clippings and photographs of bizarre deformities sent by the narrator’s wife. Her notes are a sweet and twisted invitation for reconciliation. Other stories in All We Want Is Everything have disturbing images—a baby being taken to die in the snow, a child being forced to get an Insane Clown Posse tattoo on his neck, a man run over in a parking garage, a teenager falling into a sinkhole—but in “Mutations,” the shocking images take on a meaning beyond themselves that is both compelling, complicated, and not fully understood by the narrator. It is this story that sheds the brightest light on the collection as a whole.

All We Want Is Everything is about people who are broken. The damage may be mental, physical, or emotional. They may be broken by fate or chance, their own poor decisions, or the cruelty of others. Part of these stories is the characters’ need to understand why they hurt—this need contributes to the retrospective nature of many of the character. But the larger part of their stories, the necessary part, is learning to move. For many of them, even this simple lesson requires drastic action. This inability to move forward is reflected in the recurring theme of reproduction in the book—there are barren adults, and there are parentless children, but the two cannot connect. The generational line, like the characters themselves, is stuck.

This collection feels heavy. There’s little happiness for these characters, but there are moments of meaning and choice that, even if only for a moment, change the trajectory of a life. For many of these characters, a hope for change, a single moment when they can fight against the current, is all they have. They don’t achieve triumphs, but they do achieve motion, which is more than they could do before.

Overall, Sullivan’s All We Want Is Everything is an exploration of power and choice in the face of hopelessness, inertia, and hurt. The stories are meticulously crafted and offer potent glimpses of characters trapped in a dark world.

Kelsie Hahn holds an MFA in fiction from New Mexico State University. Her work has appeared or is forthcoming in Barrelhouse, 1/25, NANO Fiction, SpringGun, and others. She lives in Houston, TX with her husband, Stephen Cleboski.