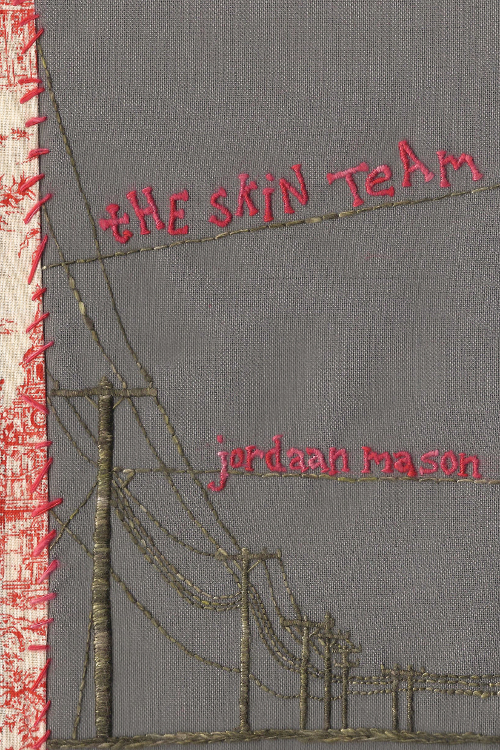 Jordaan Mason’s The Skin Team is designed to strike—at first—as a coming of age story circa Perks of Being a Wallflower or The Fuck-Up. There’s riding bicycles, there’s reading diaries, eating licorice, hanging out in treehouses, following train tracks, sharing the first cigarette, sharing clothes, cutting. There’s ample surreptitious teenage sex on mattresses in the woods. The narrator falls into a love triangle with an unnamed boy and a girl named Sarah, who is in some way involved with racehorses. As the above list suggests, Mason emphasizes that the heterosexual relationship with Sarah, wrapped in prophylactics and expectations of normalcy, can be routine, even sterile, while the homosexual relationship is vibrant with improvisation, sextapes, the dissolution of boundaries between lovers, juxtapositions of tenderness and violence. All this takes place against the backdrop of The Power Company Building, whose wires throb underneath the entire novel.

Then things get pretty crazy. Coeval with the narrator’s sexual awakening, he believes he has contracted an illness through the swallowing of metal, which “blinds” his stomach and subjects him to the influence of malevolent electromagnetic forces. The narrator also attributes eruptions of fire and rust from his belly into his mouth to this illness. (A tip of my hat to David Wojnarowicz as I pass by.)

And that’s just summarizing what goes on in sections titled “The Power Is Out, Sing.” Those sections alternate with sections titled “Synesthesia,” “Of Moving Water, Erosion and Other Alterations” and “Of Thermal Energy, The Efficient Use of Land and Continouous (sic) Operation.” In these sections, The Efficient Use of Land is a character, as are Continuous Operation and Other Alterations. Maybe the beloved corresponds to the character Kinesthesia, the narrator to Synesthesia. Or maybe the beloved is ________. Or maybe the beloved is known as Kinesthesia to Synesthesia and known as ________ to Sarah. Maybe the homosexual relationship corresponds to fire; the heterosexual, to water. Or the heterosexual corresponds to horses. Or electromagnetic power channeled by the power company suffuses them all. Conceits are temporary, mutating, polyamorous. Will there be an explanatory chart on the wiki? It’s like I’m reading The Silmarillion in 238 pages. Ok, enough joking. It’s like I’m reading a dramatization of pre-Socratic philosophers wrangling over which element is primary: fire, earth, water, air, apeiron. Mason gets pretty explicit about it: “What you believe to be singular will in fact multiply, fracture…Several of these parts have been unionized by the natural order of life into other beings which are as follows.” Also, children identified by team colors—Green, Blue, Purple—play tag in these sections. And while I did just tack the previous sentence on without segue, that’s only to indicate how much these sections pack in. (Pro tip: Remember that Mister Lonely is the name of the racehorse that dies in the fire.)

So help us all if in these sections the perspective switches between Sarah, the lover and the beloved, as the italicized diary entries wedged into Skin Team for five pages and never again taken up suggest. Surrounding hints like “I had to hide the bloodstains on the bed from my mother and father,” suggest Sarah is speaking at times, but I don’t know exactly where she stops and where someone else begins. If Skin Team speaks in the lover and beloved’s perspectives as well, I’d be hard-pressed to tell them apart. Yes, yes, I realize this is deliberate—the inadequacy and injustice of language’s static map onto the fluidity of the body and the world and all. Just a reminder that when I say “narrator,” I could be dead wrong.

As may be obvious by now, but Skin Team does not so much unspool a narrative in chapters and paragraphs as layer on lyrical vignettes. In case you enjoy a good whodunit, it is the narrator who burns down The Power Company Building, Skin Team’s major dramatic action.

For three days, I hid from the cops. I was confused, yes, I thought that all parts of me were transmitting radio frequencies and they could track me down. But then I remembered that all of the evidence against me was burned, and there was no proof…In fact, I might as well have just yelled it out in the streets: I did it, it was me, you fuckers, it was all of us, we did this together, your body doesn’t end where you think it does, so will you talk now, let’s talk now.

Skin Team is a novel for poets, to be read as much for the language as for the plot, to be untangled. It bears mentioning that in this passage, Mason doesn’t aim for psychological depth. On the contrary, there is no boundary or surface which makes depth possible. If the individual-in-society is governed or parasitized by the pre-Socratic elements, then Skin Team seemingly proposes as cure an act of emancipatory violence, the blind embrace of the elemental. Or, to use the language of tag instead: once you’re It, the only way to no longer be It and stay in the game is to tag someone else It. Tag effaces its participants, reducing them to colored shirts, and constantly seeks to expand, absorb those outside the game. The only way to escape may be to become naked, become a member of the skin team.

Yes, the novel explains its own title. There’s also a moment when Sarah speaks the title of a section: “She smiled, huge and nauseating. She said: The power is out, sing.” Which reminds me: I would wish that Mason permit some more sympathy for Sarah, the one character whom I can most consistently track and therefore identify with throughout. I would, quietist killjoy that I am, except that this novel seems so staunchly against the idea of stable character that it’s nothing against her. To quote: “All your actions which you thought were under your rational and logical control are in fact animalistic, instinctual, and cannot be contained.” Still, I don’t know why Sarah’s earned such singular exclusion through a traditional nomination, especially when distinguishing the two males would be more useful. I suppose one cruelty of tag is how arbitrarily one is It, but if Sarah is It by having a nametag, she doesn’t get a power station to burn down like the narrator does. (Unless portions of the novel are written in her perspective, then scratch all this.)

Mason opens my imagination to how the spread of disease and the selection of lovers are like tag. And to how a “blackout in a person is similar to that of a town.” Both of which are amazing, virtuosic. However, there are points in the novel when all the purple passages drawing attention to themselves dilute my attention. I like to think of a novel as a porous, though bounded, system (or game, if you prefer), creating power through differentiation within a magic circle. When every sentence strives for preciousness, they risk monotony. When every other vignette pulls me toward a new conceit, I feel too mistrustful to invest in it lest it be dropped at the turn of a page (for example, the magnetic vs. polar cardinal directions, or geometry class, or the heirloom which the father puts in the child’s mouth). It suggests that Mason could not decide whether to write a novel with a clear major conceit or a collection of poems with several. Hence, the highlight for me in Skin Team is not

Just him and I both tasting the ends of lightbulbs. Like electroshock therapy on the human tongue, dried and held out with prongs, a hundred hands trying to pull it from the mouth. I achieved my own spine coming split out of me, vertebrae once vertical now aligned with the hands of horizons.

beautiful as that passage is in excerpt. Nor is it the sex, nor the narrator’s sophisticate distance from the sex. Nor is it when the narrator has a vision in which Sarah gives birth to a horse. The moment I love is when the narrator discovers the twenty-one records in his father’s secret collection then takes them to the tree house:

I shared this with him one night. We took the box of records and my dad’s record player to the treehouse. We had to unplug some of the lamps, which became an argument between us. He said that we could not unplug the lamps, what about the noise of lamps.

At first, I want to take advantage of the ambiguity of “this” and “him” to imagine that the narrator tells his father of this discovery, that the narrator and his father are in the tree house, and that the father, a nuclear family breadwinner working for the power company, is having a playful argument with his son about how to best allocate electricity for light vs. sound. Maybe the father’s stingy imagination is freed from the power company via the narrator. And in turn, the narrator’s imagination, so overwhelmed by synaesthesia that it can’t decide, receives some direction. I am this hungry in my reading for a human moment, free of figuration, for a relationship outside the claustrophobic ménage à trois. Then I realize that “him” is the beloved. Then Mason writes, “I did not invite Sarah.” And then I’m off thinking of Jules et Jim, of a mustachioed Jeanne Moreau beating Oskar and Henri in a footrace.