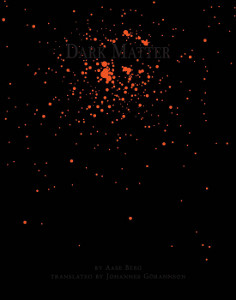 One contracts and soon succumbs to Dark Matter more than one begins to read it; no matter how this review begins, a cursory tracing of infection patterns would be more suitable. Recurrent throughout this latest translation of Aase Berg’s poetry is the image of the black shell, which might be a cracking, hatching chaosmic egg, or a labyrinthine whelk’s shell, which protects a sexual pink softness, or both. By designating that which emerges from this shell as a “ghost in the machine,” an originally pejorative phrase for Rene Descartes’ mind-body dualism, Berg provides human consciousness with its birth. To do this right away signals a great audacity, as one immediately asks what consciousness is present to observe the birth of human consciousness, and furthermore at what spatial and temporal scale this consciousness observes. Perhaps this poetry’s audacity is designed to match and/or mock the audacity of scientific theories which over-extend beyond observable evidence. Or, to rephrase, in Dark Matter the future which science, pseudo-science and science fiction points toward feels like an obscene recapitulation of the creation myth. For example, from the prefatory section of the book:

We of this species had always had an inner capsize, but not even the odor diverged noticeably, and we were fully capable of maneuvering naturally. It was therefore very easy for me to determine grain levels of the samples I encountered.

In Berg’s language, which deploys neologism and bizarre grammar, one is invited to practice new logics or analogies. If the ghost is born of the dark material machine, does it inherit the machine’s characteristics in its genes? If yes, and the dark matter is opaque and inscrutable, then the consciousness can learn nothing of itself by studying its parent empirically. If no, then the consciousness is an orphan, a “deformity, an aberration…a slit in the structure.” It is lost in the hostile world and to itself. Rather than accepting Descartes’ comfortable Cogito ergo sum, Berg explodes the disjunct between mind and body into grotesque, unforeseen conclusions. An architectural or geological formation may have a face or faces, a name or names, corruptible bodily organs or erupting limbs as much as a human may not. Flesh is machine, mineral is flesh, figure is indistinguishable from ground. This yields powerful imagery in Dark Matter, such as “Here runs a visible underground border, a fistulation toward Mare Imbrium. I thrust the muscle latch toward the machines that throb there in the wound” from “In Dovre Slate Mill.” Or “Here the tendons weave a cathedral of signs from Pangea’s hidden core. Here the cranium glows in the memory of the machine’s facial features” from “Cryptogram.”

By exploring the inscrutability and promiscuity of the material world and perceiving-of-world, Berg initiates the reader into a pleasure of sensing askance: where ocular witness is either deprived of any stimuli or overwhelmed by hallucinations, listening becomes magnified, as in “Ocular Viscosity,” where

Optical illusions crawl.
Where can one go from here?

To seek a telos is to sink. Outward attention leads to inward inundation. The halo, a marker of spiritual acceptance, becomes a black hole. Elsewhere, one discovers irradiated lemurs, collapsing hermaphrodites, refineries and scrapyards, a “deep-sea hurricane” and “breast-blue lilies drooped over the lacunae.”

Of course, one must remain mindful that the American audience receives Dark Matter through the interpretive framing of Johannes Görannson. If Berg writes, “Come Leatherface, my love, glide into the face of the secret’s bestial longing” and never again makes mention of Leatherface, both Gorannson’s introduction and the copy on the back cover, while acknowledging numerous sources, emphasize Berg’s allusion to and alteration of The Texas Chainsaw Massacre. It makes this reviewer wonder if the American kitschy-grotesque aesthetic, as it codifies its discourse and forms its canon, is promoting an edgy, hip Dark Matter that is in constellation with Bataille while keeping mum on the Dark Matter in constellation with Novalis (whose verse serves as an epigraph for the book), the Dark Matter which frequently addresses traditional philosophic questions on idealism vs. materialism, artificial vs. natural, reason vs. will, being vs. becoming, unity vs. strife.

As Berg approaches the conclusion of Dark Matter, the dense prose poems morph increasingly to lineation and stanzas. Also noteworthy is the slippage from the titular dark matter, towards the darkness of matter, described by Berg in italicized sections as “soundless,” “endless,” “eternal,” and “formless,” toward matter itself in a later poem, “Immaterial”: “Matter lives. / Matter is pure evil. / Matter compact and resistant / There is no space for compromise here.” (One can almost hear Charlotte Gainsbourg saying “Nature is Satan’s church.”) Here Berg highlights her interrogation of Cartesian dualism, posing against the impenetrable matter a “we,” or “Aase-we,” simultaneously individual and collective consciousness, which “explodes the gene” from which it has evolved and asserts its will. The turgid phrasing suggests the poem is unwilling to come to any definitive conclusions: “Matter is pure evil, / deformity pure will; // againstwill— // Immaterial?”. If this will or power exists, it’s difficult to decide whether or not it does so outside of matter or through a metaphysical flaw in matter itself. Either way, willpower itself may paradoxically be enslaved in that it is only perceptible by being against matter.

Equally difficult to decide is whether the collection’s final line, “And I will hover alone in me in the black shell, Aase,” is Berg-as-author and/or -as-character saying farewell to other personae named in Dark Matter (Zachris, Ivo, Alexander), or whether it is them calling out to Aase in proximal response to the penultimate declaration that Aase (or an I) will “break loose / the black shell now” and “hover alone into / the black shell” or in distal response to earlier lines: “And I will wait for you inside the black shell, Zachris;” “And I will abandon you deep inside the black shell, Ivo;” “And I will go so slowly next to you into the black shell, Alexander.” This parting word feels like a austere tenderness wrenched from the violently impersonal, a conclusion which reminded this reviewer of Kelvin’s reunion with his pseudo-father on the alien planet in Solaris, or perhaps the birth of the Starchild in 2001: A Space Odyssey, or perhaps Kusanagi’s merging with The Puppet Master in Ghost in the Shell.