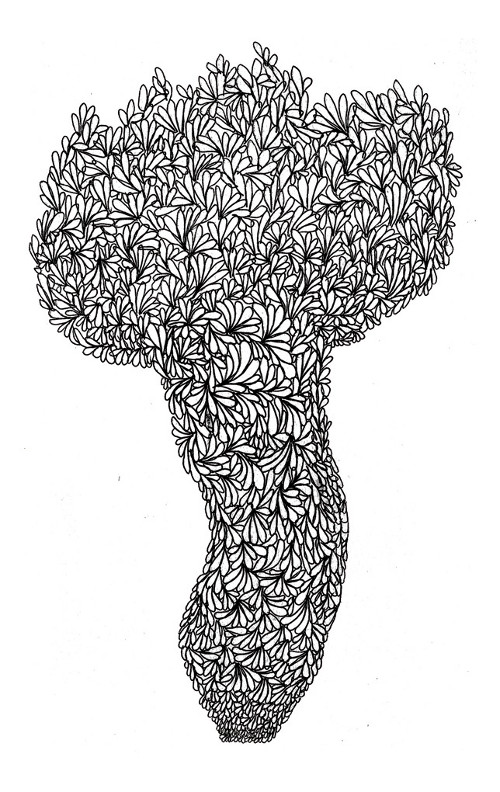 [Let’s call this paragraph a professional “full disclosure.” I first met Robert Duncan Gray as a publisher, not a poet (although one could say he had the look of a poet). Gray, alongside Lindsay Allison Ruoff and Riley Michael Parker, founded HOUSEFIRE Books a few years back. In 2011 they had asked me to write a novella for a series, which I did. We went to a bar and ate ice cream. They’re good people. Now, then.]

While The Son of the Sun might be described as a retelling of One Flew Over the Cuckoo’s Nest (but from a literary McMurphy’s perspective), the latter Amateur Pornography exceeds the strong poetry collection it would be if left on its own, and make’s Cabbage Language all the more interesting and exciting for its context. In the novella portion, our hero of the mental hospital writes his own poetry—and, admittedly, hates his own poetry—and so there lingers a sense of danger and uncertainty to the entire poetry section of Cabbage Language. Gray’s voice directs us so well and carefully through the mind of his mental patient narrator, that the same clarity in the poems seems contradictory to his earlier voice. But we trust Gray, and so we keep reaching and reaching, until we fall in, deeper and deeper and deeper, and, in his final words, “over and over and over. / And over. / And over.”

It’s a remarkable thing, this book.

Robert Duncan Gray was kind enough to answer some questions about it:

First off, congratulations on a fine debut! What can you tell us about your decision to combine The Son of the Sun and Amateur Pornography into one volume, as opposed to two?

Thank you so much, Joseph!

Amateur Pornography is a collection of poems written simultaneously to The Son of the Sun, so it made sense to me to publish the two together. I generally like to be working on a handful of different projects at one time and believe wholeheartedly that, at least for me, everything ties together and the existence and success of each project depends on the others. It’s how I organize my very scattered mind and make some kind of weird sense out of life.

At this point, I read, write, and edit a lot of poetry and fiction, I make music with my band (Tiananmen Bear), I take a lot of photographs (most of the photos on HOUSEFIRE are mine), I keep a sketchbook of drawings and scribbles, I paint when I get the chance, I produce a television show (FLASHtv) and host a radio show twice a week (The Full Life Radical Radio Show) as part of my day job, and generally take on most opportunities to be involved in anything that sounds fun. Each project plays an important role in holding up the others.

Can you describe for our readers a bit the process behind publishing Cabbage Language? You’re one of the folks behind HOUSEFIRE Books. Was it strange to work on your own book? Did you write Cabbage Language according to a prompt or prompts, as others have for your magazine and books?

When I started working on Cabbage Language I was part of HOUSEFIRE but still working out what exactly that meant. Riley approached me with a prompt and a deadline, the same way he approached the other authors—J. Bradley, Frances Dinger, yt sumner, and you, to name a few—and I agreed to give it a try. I had never written anything “book length” before and I was excited by the challenge. Riley’s blind faith and encouragement were exactly what I needed to take myself seriously, so I am very grateful to him for that initial push.

One of the most interesting parts of Cabbage Language for me was the section in the The Son of the Sun when our hero discovers a notebook full of his own poetry “apparently written by [his] hand before the accident.” Then, after reproducing the poems (which I found quite good) he says “Poetry is dumb” and describes the feeling of look at them again with, “I miss myself.” When you look back at Amateur Pornography, what do you feel?

I’m glad you picked out that section, particularly the “Poetry is dumb” quote, because I feel like it is an important part of the whole work. For me, it’s kind of the center of Cabbage Language.

I love poetry. Unreasonably, I love poetry. I mean, it is illogical, how much I love poetry. But I also sympathize with Solomon’s statement that poetry is dumb. The dumbness of poetry is easily one of the things I love the most about it. I feel very lucky to be involved in the literature community and I always feel a certain awe when I take a step back and consider it from a distance. All of us—readers, writers, editors, publishers—get to spend our time and energy doing what, from a certain perspective, I consider to be playing. We mess around with words the same way I used to mess around with action figures or Legos. We have made some very specific decisions in our lives that allow us to take this quite silly thing very seriously. Of course, that’s far too sweeping and general a statement, as many people create very important and serious work, and a majority of modern literature is probably far from silly, but still, at a fundamental level, we play with words and no matter what one’s subject matter is, the way writers and editors work together is quite game-like. I sympathize with Solomon’s perspective when he asks “who is allowed to do this and why? Who gave me permission and authority to write?” I often wonder that. Why am I allowed to play like this? I think it’s a lifestyle choice. I think I sacrifice a lot in order to live the kind of life that allows me to work on creative projects and the truth is that if I knew all the reasons why, I would probably lose interest. In all things, I love the process more than the finished product.

When I look back at Amateur Pornography, I generally feel pretty good about it. Those poems are a little over a year old now and I always like my latest work the most, but when I read the work, it feels solid. There are probably a few line breaks I would tinker with, given the chance, but mostly that’s just me wanting to keep playing.

A friend of mine at work has a word-of-the-day calendar. “Cabbage” was the word a few weeks ago, but it wasn’t a noun, not a vegetable. It was the verb version, apparently “to steal or thief.” To which cabbage does Cabbage Language best refer, the coleslaw or the criminal?

We didn’t come up with the title of the whole book until both The Son of the Sun and Amateur Pornography were finished. The term “cabbage language” was pulled out of The Son of the Sun, as Solomon describes The General’s vocabulary as “cabbage,” by which he means that The General has a unique way of speaking, selects odd words and constructs bizarre sentences, often abandoning proper grammar and dictionary definitions entirely. So, in the spirit of The General, I would have to say that this particular “cabbage” is neither coleslaw nor criminal, but something else, specifically about language.

You are also a musician. I saw you play in Portland, Oregon. How do you distinguish songwriting from poetry/prose writing?

As I mentioned above, I generally have a lot of different creative projects going on all at the same time, but within that, on a practical level, songwriting and poetry/prose writing remain pretty distantly separate for me. When writing songs, I generally have a guitar in hand and a notebook within reach. I come up with a guitar melody and start mumbling gibberish over it and then begin to exchange the gibberish for words. It is a very rhythmic way of writing and I am not thinking about the page and how the words are visually arranged at all. I am not thinking much about narrative or making sense.

I remember reading about Bob Dylan writing poetry or prose and having a breakthrough of sorts when he began to realize that he could turn those texts into songs. I have borrowed phrases and ideas from my own texts to work into songs, but personally I have had no luck singing something that I did not intend on singing from the get go. I am not a very good guitar player or musician, I am mostly just oud and noisy, so I work within some pretty finite musical limits.

What’s next for you? Are there tour plans?

At the moment, I have no plans to tour. I work forty hours a week at a day program for adults with developmental disabilities (Full Life), which means I don’t have much money and I don’t get much time off, but I do love my job and have very few complaints. Just like the various creative projects I rambled about in lieu of directly answering your first question, I consider my job to be an important part of my creative process. It is a constant source of inspiration, friendship, energy and fun. It is easily the most important thing I get to do.

I am working on some exciting projects, though. I love playing music with my band, which is still pretty new and wild. I am working on a documentary film with my clients at work about their lives and how they navigate the world with their disabilities. I have been working on a manuscript of poetry for about a year now, which I am very excited about. I think it is a really strong collection full of work I am very proud of. I’m tinkering with it and putting some final touches in before sending it out to some publishers to see if there is any interest. Submitting manuscripts is a pretty grueling part of the process, but at the moment I am just excited to send it out and see what happens. I also have a few little chapbook projects I’m working on, which is always fun.

Today I am happy because my partner, Lindsay, and I are going to shoot a short film in our kitchen. It’s Saturday and the light is nice, so it seems like a perfect thing to do. We live together with our cat and bunny rabbit. Working and being silly with Lindsay is the greatest thing. She’s the best.

What’s next for HOUSEFIRE?

We are working on some really fantastic projects. This year has already been so exciting for HOUSEFIRE and things are only getting bigger and better. We are publishing two wonderful novellas, one by Frances Dinger and one by yt sumner, both in the not-too-distant future. We have an e-book by DJ Berndt and an e-book by John Barrios coming out soon, both of which we are very excited about. We have some pretty exciting secret projects in the works, both in print and electronic mediums, which are so huge and exciting and secret that I can’t say anything else about them!

We are also very happy to be travelling up to Seattle at the end of March for the APRIL lit festival, which is awesome. We did it last year and it was so much fun, so it’s lovely to be going back.

Everything is so great. It’s going to be a good year.