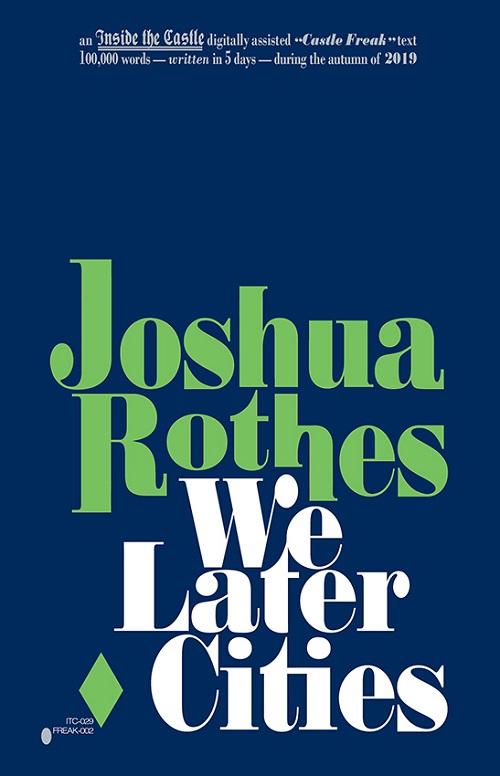 Joshua Rothes becomes the second victim of Inside the Castle’s Castle Freak Remote Residency for Generative Digital Composition—which requires the afflicted writer to create a 100,000 word manuscript in five days using bots/Twine-builds/neural networks/etc. Whatever means necessary. The first book to come out of this was Mike Kleine’s Lonely Men Club, which utilized the probability functions in Twine (a choose-your-own-adventure builder) to create an interdimensional and arcane machine. Now, we have We Later Cities. Written using equally obtuse methods. Pulling on the strings of a half-asleep creature.

The program that fuels the text (the churning of the text) utilizes a recurrent neural network (RNN). Fed architectural theory, Calvino’s Italian fairytales, Rothes’ own writing. When it came time to create the text, Rothes worked this RNN into a custom writing application. If Rothes stopped writing for too long (twenty seconds … thirty seconds) the machine would take over—take his place. And begin outputting new text on its own.

We Later Cities is split into three sections: Back East, Silverine’s Mythology, and Out West. With the second being a lateral movement into the machine’s uncontrolled ravings. The first and last operating more on this racing anxiety between the Rothes and the RNN.

We begin looking in at an escherian construct: “The city is a state of propaganda.” Rothes depicts a place that is in constant flux. Changing and distorting in seemingly random ways. It bends at the whims of the machine. Likely puppeted by an esoteric set of algorithms.

Writing has nothing to do with meaning. It has to do with land-surveying and cartography, including the mapping of countries yet to come (Deleuze).

The text is an architectural object. Its function is to be moved through. The lexicon becomes a list of building materials. Each sentence a different display of their possible arrangements. Different structures in the We Later Cities complex, or different levels of the Ballardian skyscraper. Each its own micronation, built from the same materials, but governed by different laws.

Recurring descriptions of cosmopolitan spaces at first are reminiscent of Robbe-Grillet (particularly Topologies of a Phantom City)—his re-electrified brain. But then they become more tactile. They find more footing in our reality. It feels as if we are first arriving in this place, getting our bearings, and then with time learning how to adeptly navigate its corridors.

Every sentence is a corridor. The corridors are long and winding. They never seem to lead to the same place, and when you turn around, it doesn’t seem like you’ve come from the place where you started. We Later Cities does not so much present a labyrinth as it does a mass of writhing tentacles. Nothing remains still for long.

The uniform use of massive block paragraphs throughout the text then feels like the substructures which these corridors move through. Rendering a city that is simultaneously hollow and dense. Filled with air and ink.

“And the place was to be sold only in the most, and their strongest stone houses, which the solution will be created.”

The assembly process itself articulates this tenuous relationship between man and machine. Both competing for the same position of power. Their methods at first appear distinct and contradictory, but the results are indistinguishable. I at first thought this meant the machine won—it can do what we can do—but I think that bar is too low. It only means that we are on equal footing here. They can build a city as needlessly complex as we can. And vice versa.

In the authorial relationship, there is very much this struggle to maintain control through outputting. Creating new page matter so that the machine cannot do the same. But there is always this thing looming. Waiting for the author to delay even a moment. The result being this ever-changing object. A gelatinous interior. Stable and unstable. A mutative culture.

In subverting this traditional authorial position, We Later Cities then becomes a text without an author at all. It is written by we, readers. Extracting meaning where we can/desire to.

Reading here is a matter of viewing/scrying. Our eyes sutured to the wall of text.

Often discussing texts that are meant to be viewed, we think of something more overtly unconventional. Displaced textboxes, diagrams, text running across the gutter. But the architecture of We Later Cities is more unassuming. It does not at first reveal itself.

“This bacterial glut, a film not an organism.”

But we are looking at towers. A row of conjoined skyscrapers or apartment complexes without doors. Each block paragraph is long/dense. Winding sentences pull the eye through long passageways. The act of scanning the text begins to resemble wandering a hotel you’ve never visited. We are always moving forward, but without direction or understanding. Once you have entered the structure, you are in it. There is no progressive path from the entrance to the exit. All movement is lateral.

And nothing is hidden. The joinery is still visible. There are knots in the wood and the marble is chipped. Language is a fluid material. It can be bent and twisted. Grammatical errors/spelling errors are not fixed or replaced. They are left in their place. They are proof of the building process.

Towards the very end of the text, these towering columns begin to break down. The text becoming an archaeological site. Fragments of the machine’s output collected on the white backdrop of the page. All placed in their hypothesized position. Soon not even the structure as a whole can remain as it was. Everything is in flux. The tower is soon to be replaced by a low-lying compound, or a beaver dam, or a townhouse.

We Later Cities is utilizing its spatial language to make the book-object haptic. To make the strain it places on your eyes usable. Pulling the reader into this active position. Letting your eyes glaze over the page and see the structure for what it is. 3D objects flattened. The ink an artifact of their presence.

Buy directly from Inside the Castle

Mike Corrao is the author of three books, Man, Oh Man (Orson’s Publishing), Two Novels (Orson’s Publishing), and Gut Text (11:11 Press); one chapbook, Avian Funeral March (Self-Fuck); and many short films. Along with earning multiple Best of the Net nominations, Mike’s work has been featured in publications such as 3:AM, The Collagist, Always Crashing, and The Portland Review. He lives in Minneapolis.