Ryan Bollenbach here. Starting today, Heavy Feather Review is publishing short pieces on the blog from writers who have collaborated on previous projects in order to give potential collaborators ideas and stoke excitement for The Zachary Doss Friends in Letters Memorial Fellowship (collaboration itself being the biggest takeaway I hope to create from all this). Please read about my late friend Zach and consider creating work for the fellowship. After May 31, I will award $50 to four pairs of writers who have collaborated, winning praise from friends of Zach, Brandi Wells and Leia Penina Wilson—and myself. The friends’/comrades’ work will appear in print in HFR Vol. 11.

I have asked numerous collaborators to contribute a piece about their process, and we’re taking a very liberal definition of collaboration here, so however they wanted to talk about their collaboration is welcome. Translators may make a run at collaboration in this regard. I provided sample questions but these features don’t have to be a one for one interview format, no siree. Collaborators might interview each other, or create some document such as Polaroids from a fake stan, etc. However, some collaborators have chosen to simply answer the questions, which is also great. Deviation is, of course, welcome.

I am Mike Corrao, a writer and multimedia artist, and I live in Minneapolis. I am the author of two novels, MAN, OH MAN (Orson’s Publishing) and GUT TEXT (11:11 Press), and I also wrote one book of poetry called TWO NOVELS (Orson’s Publishing). I have written two plays, SMUT-MAKER (Inside the Castle) and ANDROMEDUSA (Plays Inverse, forthcoming), and I have two chapbooks available, AVIAN FUNERAL MARCH (Self-Fuck) and SPELUNKER (Schism – Neuronics) … My books often explore the haptic, architectural, and organismal qualities of the text-object … You can learn more about me at mikecorrao.com … My new book / blocking diagram / set design document / lighting script, SMUT-MAKER, was just released by Inside the Castle, a small press operated from Lawrence, Kansas. From their website: “Our books are unique from one another but share a vision, that literature is not representational but incantatory, that books are objects that exist much like other objects in your life and home, only they have additional dimensions, not dimensions separate or distant from the ones you occupy, but involuted dimensions that only become apparent when you reach out to them” … So I reached out to my publisher, John Trefry, to see if he’d be open to doing a kind of examination of the design process for SMUT-MAKER. I thought it’d be fun to see his notes for a few of the 72 acts and what kind of logic guided his design in certain places … John and I ended up having a few hours of overlapping free time so we wrote up a conversation in Google Docs. Check out the fruits below. 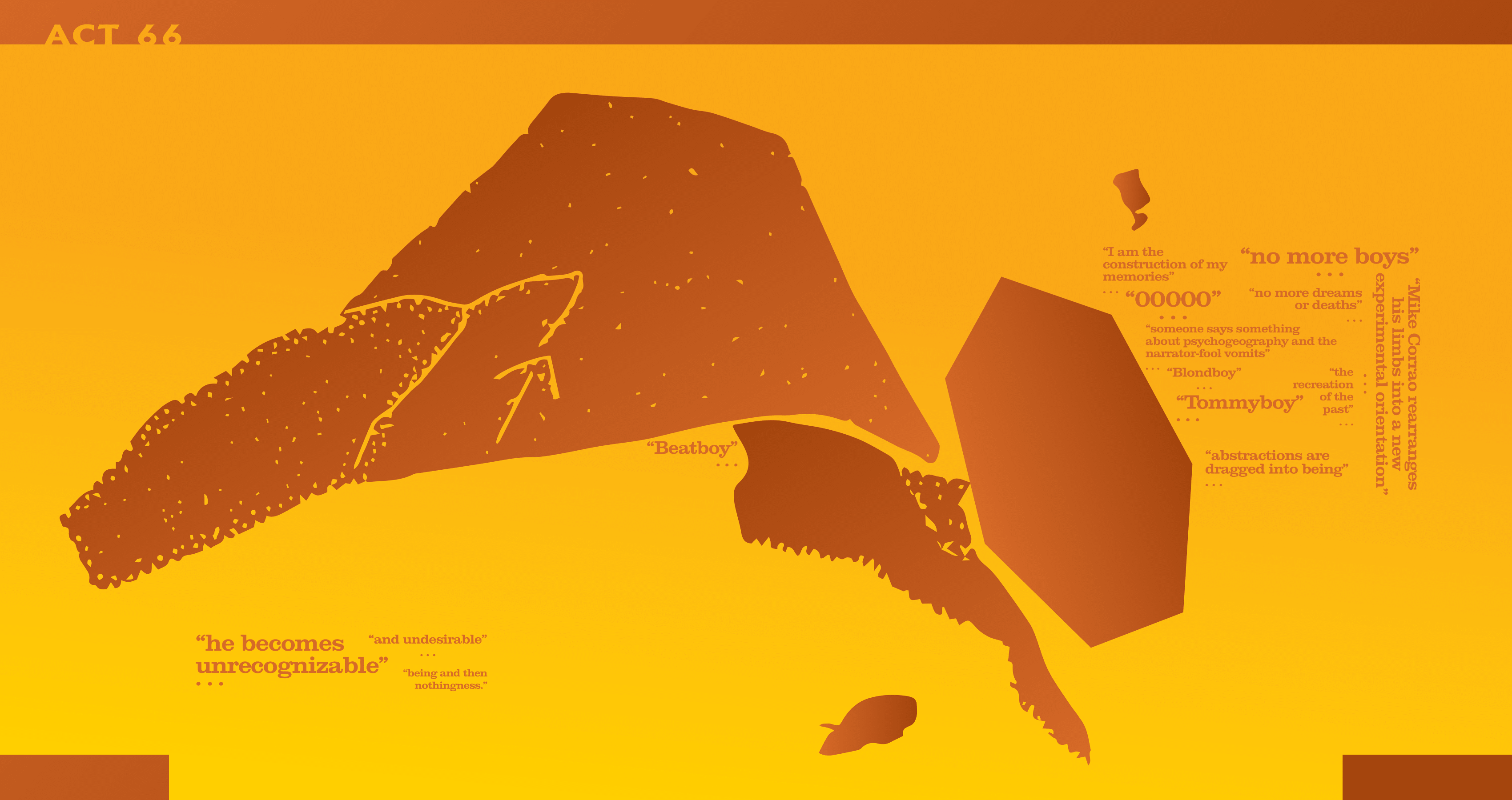