In Buddhism, I have heard them refer to this as “monkey mind”—that endless chatter of what we are doing, what we are about, the way it goes, often beyond us, in the background or the foreground, the parade of images, and half-thoughts, noises, thoughts of smells, things that never happened to us, but appearing so. Often I have wondered, Well, who’s talking? You know? I mean, it’s in my own head, and yet it’s not me, not all of the time.

This book’s cover is the title surrounded by two names. Unfamiliar with either author listed, the first thing I wanted to know was who authored which part. A quick leaf-through showed no explicit delineation in the text itself. Google revealed Paul Maliszewski as the author of several books but, quizzically, listed a 2012 version of The Hypothetical Man. Was that different than the 2019 copyrighted version I held in my hands? Or was it a simple typo? The secondary author on the 2012 version is listed as Ryan Weil, not the James Wagner I had on my cover. A “Ryan Weil” search yielded little outside of his official bio: “Ryan Weil lives in California.” I wondered if I had encountered a LaFarge/Poissel situation that would send me into a spiral of questioning identity and reality, ending in an existential nervous breakdown. The answer is: Probably, but that was most likely going to happen anyway. 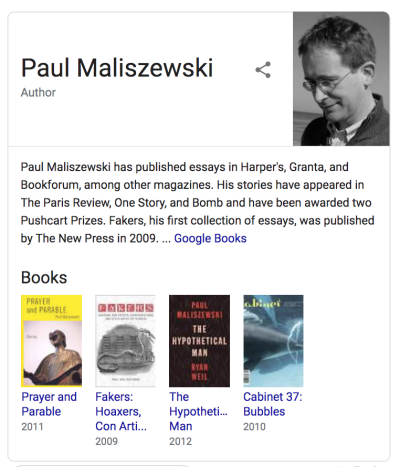 All of this foregrounding serves as an excellent preparation for reading this novel. The Hypothetical Man is a collection of Pynchonesque short stories, somewhat interconnected, that reveal just enough to make the reader feel like they are on the verge of discovering the answer to some great mystery. Or at least whatever it is that connects between each story.

Most of the book takes place as an interview between characters named A and B, or vice versa. One could easily see it as being Maliszewski and Wagner/Weil’s alternating dialogue; as them responding textually to each other. That being said, it could also easily read as a schizophrenic having a conversation with himselves. At any rate, the narrators, whomever t(he)y may be, are obscured and anonymous. This interview/dialog convention reinforces the theme of identity throughout the work—we never really know the narrators (though there is some evidence that B is an actual, not just hypothetical, man). These (largely) disembodied voices reveal elements of themselves and their thinking but often the other voice responds skeptically. It makes the reader question what elements of a person are actually real, what pieces of identity exist merely as performance, and whether or not something becomes real simply because someone has said it. When we invent a truth, what stops it from being so as long as one other person holds it in some consideration?

The first story, “Preplanning,” roots all future conversation in the absurdity of language and the complexity of its logic. It establishes some relationship between the narrators, though without too much definition. From the very beginning, the reader is introduced to a sense of foreboding, of mistrust and obfuscation. But one of the narrators reminds us that “[o]ne shouldn’t interpret departures from convention as lack of any plan.” The narrators seem to talk without sight, as if on the phone or through their computers, which makes the entirety of the narrative itself a created narrative or a memory. This set-up further removes speaker from reality and allows ample room for the reader to question everything that they read.

In “For Yama Is the Lord of Death,” B tells A the story of a man in a boat angered by another boat that keeps getting in his way, until he eventually discovers that the other boat is empty:

His anger was misplaced, was based on nothing. It was a misperception of reality. Do you see the point here? Are you causing your own agony, your own misfortune? Are we looking in the right direction? Should we look in all directions at once? We know from our schoolwork that it was the black sun that gave birth to us, and so we must go in search of this black light always. In the black light, the answers will be. But they may need deciphering.

So the author(s) are telling the reader that interpretation can be flawed and that we often read something into a situation or person that doesn’t really exist. Instead of giving us understanding, the author(s) challenge our conception of meaning-making by having A and B contradict and disagree with each other. There is also a flood of seeming non-sequiturs. It can be alternately intriguing and frustrating.

Because of this flood, these details, the text can be meandering at times. There are long sections of unbroken paragraphs that delve into intricately-crafted thoughts, often presented as soliloquies, about everything from Buddhism to county fairs to beastiality. Given its postmodern philosophy, we never get concrete answers to the questions posed or any justification from the author(s) for these intense observations, other than some vague hope that they might elucidate connections between each other.

In the gutter, the reader will periodically find black swirly lines. At first, they seem unintentional but, as they gather, the reader again realizes that these departures are indeed part of a larger plan, another ensnaring detail. The title story reveals their origin and they continue to symbolically represent that “[e]verything else—this hair, these words—is stuff floating by, wisps.” There is something revelatory in this special type of bewilderment; we are surprised by the oracle of our own confusion.

Intensely philosophical in a hardboiled detective novel way, The Hypothetical Man treats every element of life as a part of a larger investigation. If you enjoy solving intricate puzzles or piecing together disparate clues, then you will enjoy this novel. It resists easy interpretation. In some ways, it seems like a book about two people who are kind of talking to each other, and kind of talking to themselves. These stories mirror the chaotic barrage of details, images and memories in our lives and seem to imply that clues towards Meaning exist everywhere in their/our world, though some only further obscure a larger truth. In the end, the reader has to ask themselves: The Hypothetical Man—what part of him is deceit? What part of him exists even if he doesn’t? Answer: “Maybe the hairs mean nothing, and we are chasing a dream.”

Buy The Hypothetical Man at Amazon