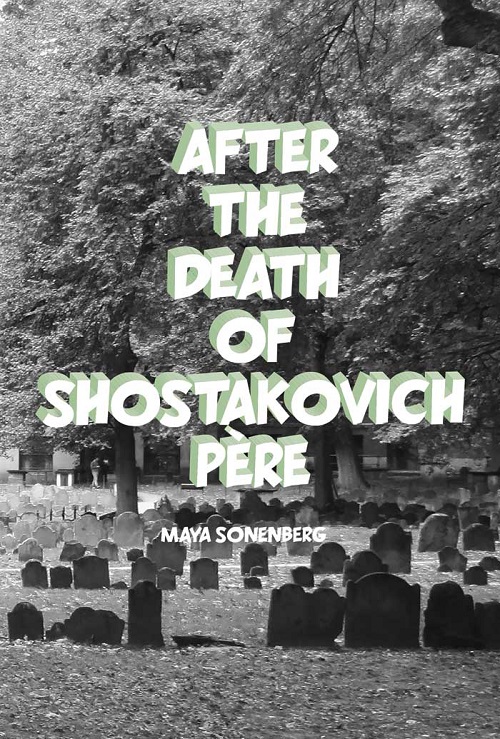 “I wish you could hear the bells”

We are many and we sit in a circle. I light a match for us to pass around. Inquiry is distraction’s lover. Our fathers have died, or will. We have read Maya Sonenberg’s After the Death of Shostakovich Père, a dark music of spiritual interruptions, a predictive diary, an inherited memoir. The match goes out in someone’s holding. Our memories, they shorten, separately. Whose childhood does a child have?

“the killing tells a kind of story”

In four movements, Prelude / Danse Fantastique / Nocturne / Finale, Maya Sonenberg, while both carrying the transportive death of her father and embodying the simultaneous transformations of spy and scholar, acknowledges and interrogates the differing accounts of all sorts of passage, be it the tunneling one does below, the piecing together one does on land, or the message one dances to when seen from above. These are entries to loosen sky and rain fossil. Sonenberg’s verse is a disappearing ink put to page by one subconsciously eyeing a comet. I can’t tell you where I was when I read this work, only that you could have found me only by the body belonging to the person clutching the dollform of my likeness.

Sonenberg doesn’t stop at loss, and we should be grateful. The art, here, survives the haunting and allows that apparitions are fragile, and fragility a piano music that makes a map of not touching the earth.

“any box could become a smaller box in his hands”

Ask: what does the future hold for the remembrances one narrates and, in so doing, finds them only previously flawed? Ask: what written thing can one fold into the clay hands of a sculptor’s creator? I would offer that in Sonenberg’s answers are the cautious flowerings of our preparedness. As art is the phantom calendar of our memory’s apprentice, this book abandons its clock to leave a mark.

“a stowaway in my secret family”

The props, here, are parental: snow, traffic, motel. War. To be cared for, or cared about, a thing cannot be seen as borrowed. Cannot be touched by the brief. As written, this work understands to twin itself in the eyes of both projection and presence and to own its custodial generosity might it live up to what illumination demands of afterglow. Nostalgia and revelation are charged with picking the bones of erasure, and Sonenberg is a thief of the orphan detail. Is awake to giving lineage its cameo as the lullaby that croons crooked the framework of sleep. Is the dreamer plucked from the ongoing nature of the devoured.

“my mind supplies the missing term”

If I ask death, my ask will be sung, and I will ask: in whose family are you the artist? This is a work that melodically avoids insertion and surpasses mimicry to create instead the ground rules for how to move so that one might detect the dual lay of the outskirts. By its end, something not taken has been returned.

Buy After the Death of Shostakovich Père at Amazon

Buy After the Death of Shostakovich Père at Small Press Distribution

Buy After the Death of Shostakovich Père at PANK Books

Barton Smock lives in Columbus, OH, with his wife and four children. He is the author the chapbook infant*cinema (Dink Press, 2016) and the editor of isacoustic.