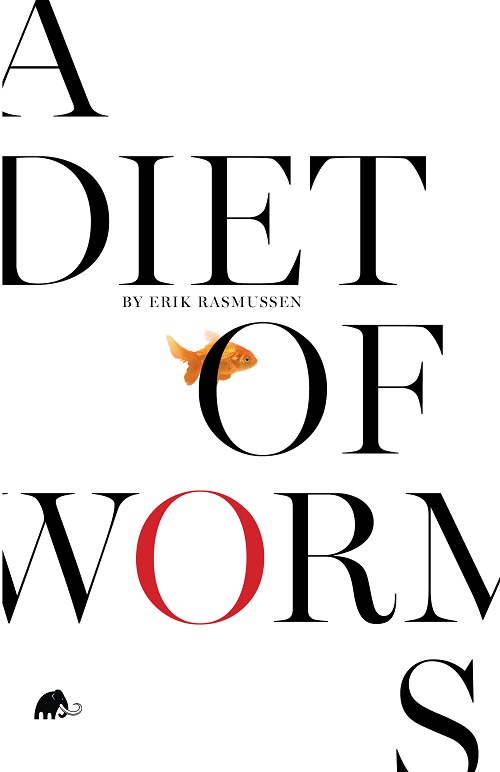 I’m not sure how old I was when two boys with a few years on me told me in Sunday school that god gave us hands to keep our arms from falling off. I didn’t believe it, of course, except when I did. Same goes for Erik Rasmussen’s A Diet of Worms. Youth is a confession that means what it says.

It is rare for a coming-of-age tale to so often stop time. Rarer for any tale to cast metamorphosis as a thing evoked. But the writing one sees in this invisibly occurring work is originally rare. Is beheld twice. Whatever guides its glowing scrawl does not feel influenced. Does not feel doomed. Feels, instead, hereditary. And is darkly saving.

Years ago, I read Sherwood Anderson’s Winesburg, Ohio and … I don’t know. I had to walk around outside after reading it. A Diet of Worms is a separate creature, but it pointed to me much the same as that previous, remarkable, elsewhere. Something in its poetic ash, like a compass. I needed to walk on the earth.

Rasmussen has a way with the wayward and, in his narrator Larry Morvan, has created a deeply quick character who achieves guilt by disassociation. Whether making a game of passing out in order to dream or taking mime-like drags from unlit cigarettes, Morvan as a narrator remembers that storytellers are only as real as the age they are when speaking, and his presence asks one to take a soft knee in the foreground of the book’s immaculate accumulations.

What memory is to the elephant, sadness is to the dirty joke. I mean, this book is funny. If cruel, it’s because a rib has been lost. And looked for.

Larry Morvan’s mother can’t smell. Not nail polish. Not fake blood. His sister dresses him up. His father is sick. His best friend wonders how far from home one can take nakedness and together they instruct their want to outmatch worship and leave bread crumbs for appropriate play. These are Rasmussen’s eggshells, and they are markers to a prose that makes of footprint a fallen nest.

VI. THE MOUTH AN EMPTY MAP

Diet is the language of the soul. Rasmussen doesn’t take the words from your mouth, nor does he put them there, but instead uses transcription to decorate the voice of the practiced-on doll of grief. Look, no one sees your performance if you’re crawling on your belly. Here is a story that bends loss until it becomes theft.

Barton Smock lives in Columbus, OH, with his wife and four children. He is the author the chapbook infant*cinema (Dink Press, 2016) and the editor of isacoustic.