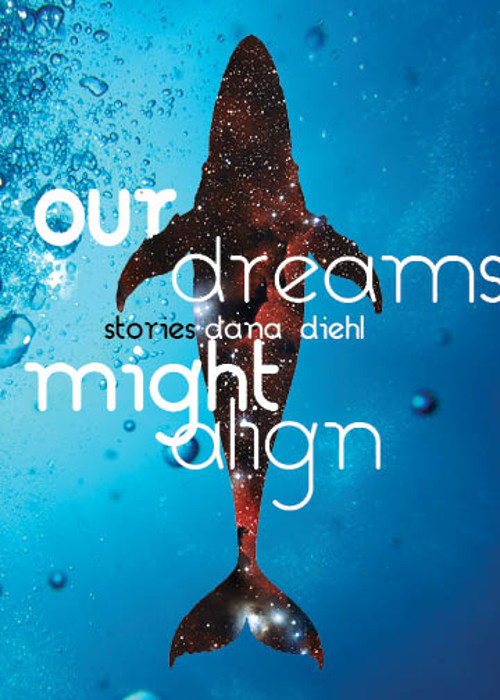 We assume we are closer to other people than to nature. Maybe because we congregate in cities, maybe because we have perpetuated myths about how unlike animals we are. In Our Dreams Might Align, Dana Diehl challenges our notions of separation/connection, particularly in regards to the natural world. Diehl’s universes are ones of magic and animals and movement, laced sometimes with intersection.

In “Animal Skin,” a mother finds herself feeling disconnected from her rapidly growing daughter. When the daughter finds a tick on her skin, she opens up to her mother, asking her mother to look at her skin and diagnose her—the only way for these two to regain a connection is through the natural world. Meanwhile, in “Closer,” Justine finds herself immersed in the anxieties of her parents’ drifting relationship. When her mother moves them both to Scotland—and to a man who might very well end up her mother’s lover—Justine finds solace climbing the rock faces of the unfamiliar landscape:

All around, the wind howls. In cracks. In holes. In hidden caverns. The muscles in Justine’s wrists feel strong, hard, and she closes her eyes. She presses her cheek against the mountain and imagines that she can feel it moving. Imagines continental drift in reverse, the countries puzzle-piecing themselves back together. Magpies and crows fly in the same sky. Whales share a single, massive ocean, no landmasses to stop their song. And rock collides with rock, buckling under the pressure, deciding to fold.

Justine’s relationship with her environment does not directly simplify her relationship the other characters in the story. Her climb, however, brings her closer to the ebb and flow of the world. She understands change in a new and more primordial way. She realizes, also, that even the world’s strongest features—rock plates—can decide to alter themselves. In this way, Diehl has written a collection that engages with the various ways in which the natural world can disrupt and revise human patterns.

Diehl’s concern with the natural world extends to questions of place and placelessness, complicating her thematic concerns. The collection is preoccupied with travel, both for its characters and its reader. The book takes us from Arizona to Scotland to outer space, with each of the stories revealing how characters manage travel. (Diehl also manages to capture the essence of these new locales, drawing readers into a physical landscape, along with characters’ emotional landscapes. In doing so, she tips her hand as a talented writer and sensitive observer of the external world.)

In “To Date a Time Traveler” we find one of the best examples in the collection of Diehl’s interplay between place and placelessness. In this story, the narrator discovers that her boyfriend can time travel in his sleep. Each night he ventures into different eras in different spaces, while his lover waits on the other side for him to wake up. The boyfriend explores, and the narrator explains her own feelings:

You don’t leave your boyfriend, because how can you be jealous of someone long dead, someone who probably died at sea, someone whose bones turned to dust, to fish food? In the weeks that follow, he tells you about other women he meets, women who he is sure hold the key to his dreams…You spoon him in his too-small twin bed, wondering which one he’s with tonight, how they are helping him in ways you cannot. You feel for his dimples as he sleeps. You remind yourself you can’t be jealous of a ghost.

What is this boyfriend searching for? He is preoccupied with traveling back to the Big Bang. He wants to find how the world he lives in began, whether from a religious or scientific perspective. And so, even in his new state of finding women in new places to belong with, the boyfriend needs more. Can’t be satiated, as he is looking for answers for the existential. He wants to see the cradle of life, how forests and oceans and people sprang forth. Meanwhile, his girlfriend has a place in his bed, but is emotionally displaced by his interest in other women, by his traveling.

“To Date a Time Traveler” is also representative of another thread in the book: magic. Often, Diehl filters the natural world through a scientific lens: her characters are researchers of whale songs and Pangea, breeders of snakes who can identify each species with detail. Yet there are many times through the collection that the science is undercut by surrealism. The same snake story, “Another Time,” ends with a variety of endings—an acknowledgement of possibility over linearity. In “Going Mean,” a woman and her husband adopt two Komodo dragons for a period of time. The Komodo dragons are drawn both to the woman and to The Black Forest in Germany, where the couple lives. According to the narrator, there is a rumor that all the “mammals that scientists believed were extinct” reside in The Black Forest. As the Komodo dragons and the woman are drawn to the forest, we understand the implication that there is a beastly presence out there that science cannot comprehend. It draws in the violent, maybe even monstrous, personalities of the Komodo dragons and the woman. Here, Diehl comments on the fallacies in our logical understandings of the natural world. For all that humans are connected with animals/landscapes, they best understand them through instinct rather than experimentation.

The cover of Our Dreams Might Align features the long body of whale. Superimposed on this body is outer space—a perfect visual representation of how the collection explores the value and mystery of nature, along with how human relations with nature can alter previously decided upon hierarchies. Diehl’s prose moves these stories along at a confident pace. Her scenes are detailed, steeped in clever and careful imagery. But what is most exciting about this collection is Diehl’s commitment to range; her stories take us to a variety of worlds and situations that have been linked together in a delicate way.

Buy Our Dreams Might Align at Jellyfish Highway Press

Eshani Surya is an MFA candidate in fiction at the University of Arizona in Tucson, where she also teaches undergraduates. Her writing has appeared in Ninth Letter Online, Lunch Ticket, and Flyway: Journal of Writing and Environment. She was awarded the 2016 Ryan R. Gibbs Award for Flash Fiction from New Delta Review. She also serves as a fiction reader at Sonora Review. Find her online @__eshani.