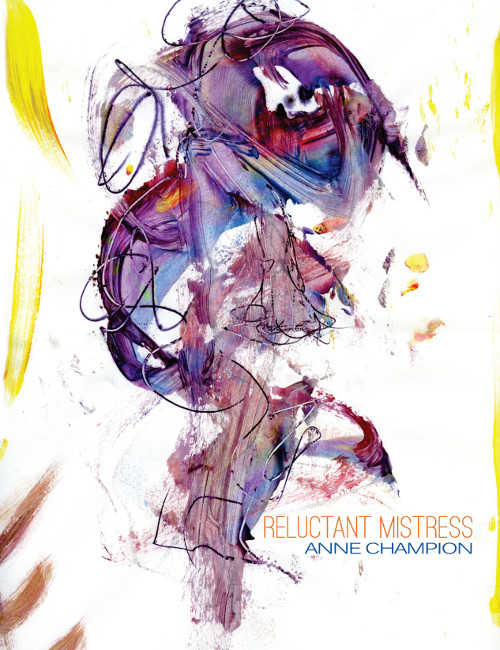 Anne Champion’s Reluctant Mistress is a beautiful first book of poetry that, like the best first books, possesses a rawness and vulnerability to it. Though there are many themes here, I believe the best developed are desire, femininity, and this notion of somehow being a runner-up.

Reluctant Mistress begins with the poem “Words,” offering us an entry into what is sometimes a harsh journey of sexuality, identity, and exploration. I love the poems here and I am drawn to the refreshing voice of the speaker— the poems are real, and the desires are not candy-coated or overly sentimental, and yet they are rich with sentiment. These poems strike a nice balance of sensuality, feminism, youth, and fieriness that are hard to forget.

Champion tackles lust early on in the book, letting us know exactly where we will be heading. These first moments of longing as it enters us in our youth are described boldly in the poem “Child’s Play”—where a first pang of wanting gets compared to fungus. A rough but beautiful thought, that our desire is rank, rotting, but delicious and strangely enticing:

The luminous marvel
of the possibility of love blooming
in your breast like the fungus
another child was holding
in front of class, a large mushroom
from her yard

Much of the work has a sense of telling what a life will amount to, and, as readers, constantly being surprised to find we have journeyed to an alternate place, so swiftly and naturally. As in the poem “Fortune,” a speaker is told they will be set for a lonely life, and yet we find them wrapped in a deep love.

Though many of the poems in this book are serious, and sometimes even heartbreaking, there are moments of humor that seem to shine. I think the technical nature of her poem “Ode to the Orgasm” is well played and charming. Similar to poems about the ocean, where there is the feeling of the waves pulling in and out—“Ode” manages to take us into the moment of pleasure as it peaks. Like any writing teacher, I tell my students to show me the thing… don’t tell me the thing, show it to me—here is a fine example of the classic show-not-tell:

to titillation, tongue to tit,
tongue to clit, prying fingertips.
To the frenzy, the easy abandon
of reason, clothes ripped, stretched
and strewn, oh, the intoxicating
power of it, dropping to my knees,
spit and friction.

How the poem itself can get away with using the “oh” (Oh! No, not the Oh!) seven times is the master of the piece itself. The humor in this poem is clear, but it quickly shifts to the seriousness of sex is in its end “cure-all, end-all, be-all/ To the one thing that makes me call/ God’s name in praise, oh,/ oh, oh, oh.” It seems to me that there is no better word to repeat here, and I love her choice of using it four straight times. Repetition is a common friend in poetry (see EVERY POET EVER for details), but it often comes in threes. If I have ever learned why I cannot recall, but my personal favorite example is in Robert Hass’ “Meditations at Lagunitas” where he ends “blackberry, blackberry, blackberry.” I like Champion’s choice to repeat the word, and I like it even more that she does it four times, not three.

Of all the poems in this book, the one that reached me the most was “Dandelions.” I find it symbolic of the manuscript itself. “You call me a non-believer,/ but I see love all around us/ sprouting incessantly/ like dandelions” Where we see that despite the cards (tarot or otherwise) she’s been dealt, love will spring in abundance. The parental advice given as a how-to is only a road map, not the road. The speaker of these poems must do the work on her own, discover her own c(o)urse.

My father called them weeds.
My mother told us to pick them
and put them in Dixie cups
around the house.
I never knew what to think.
When I picked them, they died quickly,
When I left them alone,
they never survived the winter.

I think, as I read Reluctant Mistress, that poetry is a spice—a thing we use to make life taste better. The stories we set out to tell are not always pretty ones, but in the end we must try to tell them as beautifully as we possibly can. Anne Champion’s debut collection of poems is lovely, and I will continue to come back to the work for both its beauty and its fine craft.

Hannah Baker-Siroty lives with her wife and daughter outside of Boston. She has degrees from University of Wisconsin-Madison, Sarah Lawrence College, and studied screenwriting with The Writers’ Guild of Great Britain. Her past awards include an Emerging Writer Fellowship from The Writers’ Room of Boston and a residency at The Vermont Studio Center. Some of her poetry can be found in Best New Poets 2012, Cactus Heart, Each Moment a Mountain, and Lavender Review (forthcoming). She is an Assistant Professor of writing at Pine Manor College. Learn more at poetrying.com.