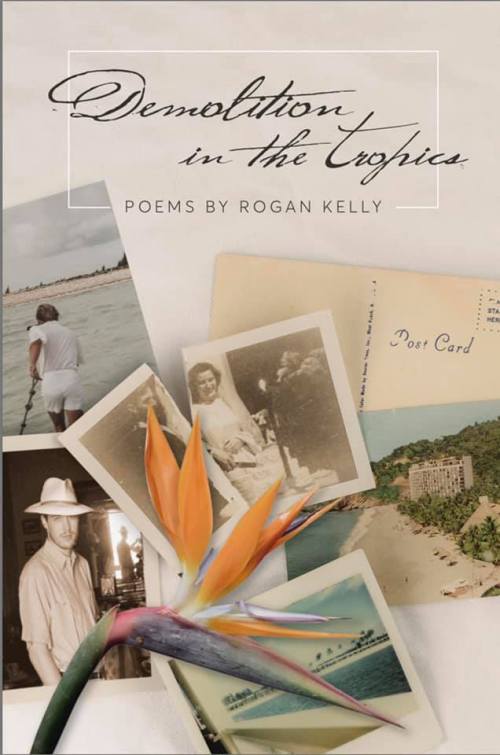 “When she stands, she is an ocean against an ocean.” —“Dream of Alexandria”

Rogan Kelly’s debut collection, Demolition in the Tropics, is a perfect menu for prose poetry. By carefully choosing poetry techniques of fiery fragmentation and amplified language, Kelly doesn’t need to prove to anyone he’s a master at the prose poem form. Instead, he presents prose of subtle allure, offering us a forbidden peek into another world.

Prose poetry has often been regarded as a non-genre by writers who don’t understand the form or feel poetry must be confined in line breaks. The freedom that comes from the exile of aesthetic is undoubtedly a world Kelly not only understands but can display exactly. How beautiful breaking apart from structure can be.

If you aren’t already familiar with the endearing attitude of New Jersey, you soon will be. Kelly, a resident of New Jersey (as described in several of his pieces), writes what he observes in an easy-going east coast manner. No one will feel out of place in pieces such as “Corner Store,” “At the Grand Gondola Senior Living Center,” and “Elegy for the Open Mic Host.” Rather than feeling like a witness, Kelly makes us believe we are a part of the play at hand, whatever might be happening. Whether it be adjusting a corpse’s dress, being seen by the most beautiful woman at the corner store, or lavished with parting gifts from a soon-to-be ex from the airport gift shop, Kelly is generous with both hurt and joy in every poem.

With the careful balance of poems involving love lost, one might be fooled into thinking that’s who Kelly is as a writer. But the brilliance behind his writing doesn’t mislead; instead, it invites us to experience not only the allure of the honeymoon period but also the devastation (and recovery) of love lost. A resignation that many of us fight against, Kelly confronts: “Ever since you’ve been dying, your life has gotten interesting.” “The Exploding Heart Technique” is one of many fierce examples of this approach Kelly exploits, exposing us to the possibility of malaise rather than resolution.

Easing us into scenes and characters then pulling the rug out from under us is another technique Kelly deftly displays in this collection. Not a place or a character is safe from exposure. Such as in “Silence at the Borderline Bar,” a standoff between two women over one man comes to a head, and although we may think we know who wins, there’s always another option waiting in the wings to surprise us. The mood often paints itself like scenes from the movie Casablanca while changing settings remotely. All our senses are amplified, and Kelly never skimps on his ability to tempt us with imagery. From “Mostly Blue Dress”: “Barefoot, dress waves, she bends all the way. The first car hops the curb, clips the telephone pole that doesn’t forgive.”

Instead, staggering scenes that move beyond the confines of construct, Kelly asks us to trust him as he pulls the line from poetry into the dangerous freedom of the prose form. Zigzagging from what could be conventional into whimsical or staggering scenarios. If the stanza is a movement, then Kelly pushes his prose form in all directions. From “Courtyard Goddess”: “The sound of the typewriter against the ocean breaking, the length of time in a cigarette or cup of tea. The changeover from music videos to French porn that I often left on to feel less alone. How the Thursday night American movie started nineish.”

In embodying both himself and us within each piece using swift changes, seemingly familiar images that become something bigger, bolder, and a canny for making us feel at ease with a New Jersey accent, Kelly inhabits each piece with committed devotion: “She quickened in my direction, stared through me. Have you ever tasted the brine of a woman’s broken heart, Lawrence? Loved her back to mend?”

Prepare to find yourself in a whole other part of the world, whether it be behind a building in Alexandria, Egypt, in “Seven Mile Coastline of Alexandra, Egypt,” where Kelly once called home, or a fantasy field of dreams, where an ex-wife comes to disclose the score of an imaginary baseball team in “Outside Heaven.”

Demolition in the Tropics displays astuteness in Kelly’s careful navigation and tender-hearted, unpredictable nature, and his obvious love of exploring what waits beyond traditional forms. We can’t help but trust him to take us to both the commonplace as well as exotic. Either way, it’s going to be one hell of trip.

Hillary Leftwich is the author of Ghosts Are Just Strangers Who Know How to Knock (CCM Press/The Accomplices 2019), which was featured in Entropy’s Best Fiction List of 2019, and was a finalist for the Big Other Book Award. Currently, she runs At the Inkwell Denver, a monthly reading series, and freelances as a writer, editor, journalist, and teaches writing at Lighthouse Writers. She is a Kenyon Review scholarship recipient for 2021. Her writing is found both in print and online in The Rumpus, Entropy, The Missouri Review, Denver Quarterly, Hobart, and others. She lives in Colorado with her partner, her son, and their cat, Larry. Find more of her writing at hillaryleftwich.com.