We editors love reading at HFR—and talking books, writing, and publishing around the clock—so we decided to catalog our selections every month as the new feature “What We’re Reading.” Following are our recommendations for the month.

“Two Novels is a manifestation of loss and confusion, constructed in its own textual landscape. Within these new works by visionary author Mike Corrao, readers will interact with something complex and ever-changing. Howl Revisited: After a failed relationship with Allen Ginsberg, the poet begins to drift away from reality. He suffers from strange mutations and various stigmata. Soon, it becomes near impossible to distinguish between what is real and what is fabricated. Green Detectives: Within Green Detectives, the reader will experience: Greek Titans coming back to life; fake poets hoping to disappear; private investigators analyzing the unconscious; nervous dinner speeches being made; summonings of Goya’s black paintings; and, a series of other mysteries that surface after the arrival of two xenobiologists in Minneapolis.”

“Marina Willett, M.D., has a problem. Her husband, Charlie, has become obsessed with H.P. Lovecraft, in particular with one episode in the legendary horror writer’s life: In the summer of 1934, the ‘old gent’ lived for two months with a gay teenage fan named Robert Barlow, at Barlow’s family home in central Florida. What were the two of them up to? Were they friends—or something more? Just when Charlie thinks he’s solved the puzzle, a new scandal erupts, and he disappears. The police say it’s suicide. Marina is a psychiatrist, and she doesn’t believe them.

A tour-de-force of storytelling, The Night Ocean follows the lives of some extraordinary people: Lovecraft, the most influential American horror writer of the 20th century, whose stories continue to win new acolytes, even as his racist views provoke new critics; Barlow, a seminal scholar of Mexican culture who killed himself after being blackmailed for his homosexuality (and who collaborated with Lovecraft on the beautiful story “The Night Ocean”); his student, future Beat writer William S. Burroughs; and L.C. Spinks, a kindly Canadian appliance salesman and science-fiction fan—the only person who knows the origins of The Erotonomicon, purported to be the intimate diary of Lovecraft himself.”

The Dark Net
By Benjamin Percy

“The Dark Net is real. An anonymous and often criminal arena that exists in the secret far reaches of the Web, some use it to manage Bitcoins, pirate movies and music, or traffic in drugs and stolen goods. And now, an ancient darkness is gathering there as well. This force is threatening to spread virally into the real world unless it can be stopped by members of a ragtag crew, including a twelve-year-old who has been fitted with a high-tech visual prosthetic to combat her blindness; a technophobic journalist; a one-time child evangelist with an arsenal in his basement; and a hacker who believes himself a soldier of the Internet.

Set in present-day Portland, The Dark Net is a cracked-mirror version of the digital nightmare we already live in, a timely and wildly imaginative techno-thriller about the evil that lurks in real and virtual spaces, and the power of a united few to fight back.” 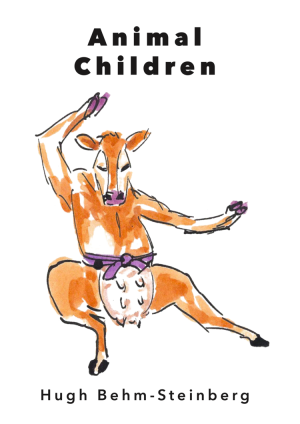 “The brief narratives in Animal Children by Hugh Behm-Steinberg work like a deceptively simple pinhole camera, a way of gazing at the deepest secrets of the heart through a lens of surrealism, humor, and pathos that renders clear that which is too intense, too personal, or too profound to be directly gazed upon. From the inner workings of 4-H clubs raising prize-winning nuns to the trials and tribulations of dating (and breaking up with) Death and Nature, to the insistence of cattle demanding to learn Kung Fu and people falling asleep during poetry readings, you will leave this book cleansed of your illusions, dazzled by hypnotic story-telling, and filled with a sense of wonder that lasts and lasts.” 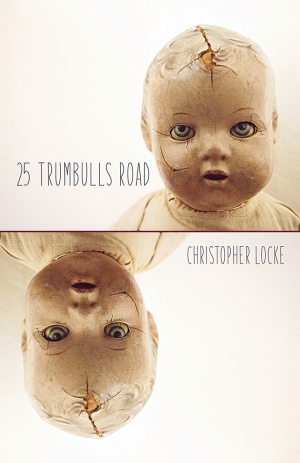 “This house has seen things it won’t let you forget.

When a new family moves into the house at 25 Trumbulls Road, the narrator’s vivid dreams of a teary-eyed, raw-smelling woman who lives beneath the floor turn chillingly real. Five years later, the house’s new set of inhabitants are visited by the spectral presence of the little girl they lost. In these five tales, linked by a single haunted house, the characters move through a world suspended between nightmare and loss, where the unexplainable and disquieting are fueled by ordinary grief and longing. Christopher Locke explores the ways in which our unspoken fears and everyday regrets sustain the darker heart of a home—its doorways and windows, its basements and lights—until it fills those corners of our lives with something close to terror. His stories ask: how does a home feed on this energy, growing stronger with each new, sinister end? As compulsively readable as it is unsettling, 25 Trumbulls Road takes us to the places we’re afraid to go, then leaves us at a destination where we are our most human.” 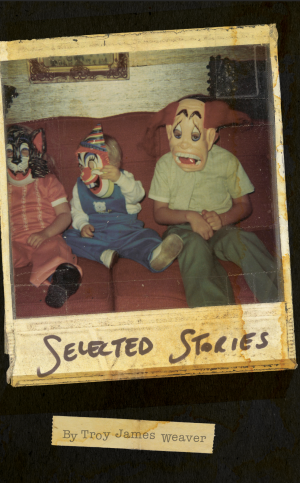 “There’s just something weirdly perfect about Troy James Weaver’s stories. Perfect because they are, down to their syllables. Weird because what they do feels so broken it hurts. It’s a kind of double whammy effect, part awe, part ache, that’s truly singular as far as I know.” —Dennis Cooper, author of The Marbled Swarm

“The speculative interruptions of this collection of organs—renamed, repurposed and disguised as a book of poems—sculpt the shape between varied and intimate utterances. It is cruel and consoling, internal, viscous, full and delicate.” —Stephanie Barber

“One of the best and most respected experimental poets in the United States, Fanny Howe has published more than twenty books, mostly with small presses, and this publication of her selected poems is a major event.

Howe’s theme is the exile of the spirit in this world and the painfully exciting, tiny margin in which movement out of exile is imaginable and perhaps possible. Her best poems are simultaneously investigations of that possibility and protests against the difficulty of salvation.

Boston is the setting of some of the early poems, and Ireland, the birthplace of Howe’s mother, is the home of O’Clock, a spiritually piquant series of short poems included in Selected Poems.

The metaphysics and the physics of this world play off each other in these poems, and there is a toughness to Howe’s unique, fertile nervousness of spirit. Her spare style makes a nest for the soul.”

“A commonplace book, arranging works of criticism looking at Alfred Hitchcock’s Vertigo with fragments of memoir/fiction. Presented first as random notes on watching Hitchcock, the fragments soon take up multiple narratives and threads and, like a classic Hitchcock movie, present competing realities. Fragments from a dizzying list of authors, from Truffaut to Philip K. Dick and Geoff Dyer to Bruno Schultz, are meticulously arranged in a fascinating, multilayered reading experience.”

I Saw the Light: The Story of Hank Williams
By Colin Escott with William Macewen and George Merritt

“In his brief life, Hank Williams created one of the defining bodies of American music. Songs such as ‘Your Cheatin’ Heart,’ ‘Hey, Good Lookin’,’ and ‘Jambalaya’ sold millions of records and became the model for virtually all country music that followed. But by the time of his death at age twenty-nine, Williams had drunk and drugged and philandered his way through two messy marriages and out of his headline spot on the Grand Ole Opry. Even though he was country music’s top seller, toward the end he was so famously unreliable that he was lucky to get a booking in a beer hall.”

Nights as Day, Days as Night
By Michel Leiris (Translated by Richard Sieburth)

“Translated from the French by Richard Sieburth, with a foreword by Maurice Blanchot. Hailed as an “important literary document and contemporary pleasure” by Lydia Davis, Nights as Day, Days as Night is a chronicle of Michel Leiris’s dreams. But it is also an exceptional autobiography, a distorted vision of twentieth-century France, a surrealist collage, a collection of prose poems. Leiris, author of the seminal autobiography Manhood, here disrupts the line between being asleep and awake, between being and non-being. He captures the profound strangeness of the dreamer’s identity: that anonymous creature who stirs awake at night to experience a warped version of waking life.

Whatever the setting (from circus shows to brothels, from the streets of Paris to Hollywood silent films), Leiris concentrates on estranging the familiar, on unsettling the commonplace.”

“In this charged collection of fifteen essays and speeches, Lorde takes on sexism, racism, ageism, homophobia, and class, and propounds social difference as a vehicle for action and change. Her prose is incisive, unflinching, and lyrical, reflecting struggle but ultimately offering messages of hope. This commemorative edition includes a new foreword by Lorde-scholar and poet Cheryl Clarke, who celebrates the ways in which Lorde’s philosophies resonate more than twenty years after they were first published.These landmark writings are, in Lorde’s own words, a call to ‘never close our eyes to the terror, to the chaos which is Black which is creative which is female which is dark which is rejected which is messy which is…'”

On a Clear Day
By Jasmine Dreame Wagner

“On a Clear Day, the second full-length book by Brooklyn-based musician, poet, and essayist Jasmine Dreame Wagner, looks toward horizons past and present, natural and synthetic, individual and communal. Over the course of this formidable project, readers are welcomed into a perspective refreshingly nuanced and unpretentious, particularly when it comes to those themes familiar to so many Americans—post-9/11 national identity, industrial detritus, the 20th Century’s long goodbye, and the ever-present click-bait listicle. Wagner’s keen eye for journalistic detail finds a brilliant counterpart in the inquisitiveness of her dynamic imagination, punctuating stretches of awestruck calm with pointed exclamations for action. Consisting of both lyric essays and poems, On a Clear Day is as concerned with blurring genres as it is with breaking away from their constraints—formally, as well as what readers expect of these genres, be it philosophical tract, memoir, or meditation.”